Source: DECR
Natalya Mihailova | 13 April 2017
On 11 April 2017, at the Moscow Patriarchate’s Department for External Church Relations, its chairman, Metropolitan Hilarion of Volokolamsk, met with Ms Hadiya Abbas, Speaker of the People’s Council of the Syrian Arab Republic, and a delegation of the Syrian parliamentarians and public officials who accompanied her. 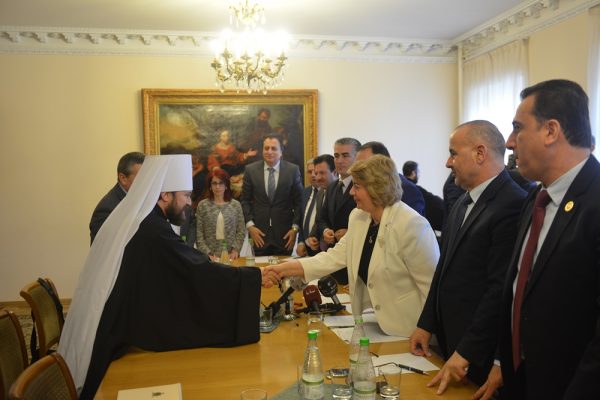 Taking part in the meeting were also Mr. Riyad Haddad, Ambassador Extraordinary and Plenipotentiary of the Syrian Arab Republic to the Russian Federation; several members of the People’s Council of Syria; archpriest Sergy Zvonarev, DECR secretary for far-abroad countries; and Hierodeacon Roman (Kiselev), a staff member of the DECR Secretariat for Far-Abroad Countries.

Metropolitan Hilarion warmly greeted the speaker of the Syrian Parliament on behalf of His Holiness Patriarch Kirill of Moscow and All Russia, saying,

“I remember very well the wonderful peacetime atmosphere in Syria. I visited your country on various occasions, for instance, while accompanying the Primate of the Russian Orthodox Church. Christians and Muslims lived in peace and accord, and a church and a mosque stood in one street.”

On behalf of the Russian Church, the archpastor expressed support to the Syrian people facing the challenge of global terrorism.

“I would like to assure you of our solidarity with the Syrian people,” Metropolitan Hilarion added, addressing the speaker of the People’s Council of Syria, “It is my wish that the bloodshed will stop in the nearest future and the long-awaited peace and accord will be re-established in the ancient and holy land of Syria.”

As the DECR chairman told his guests, the Russian Church and the Patriarchate of Antioch maintain fraternal relationships, combining their efforts to render humanitarian aid to the Syrian population.

The speaker of the People’s Council of Syria thanked the hierarch for his kind words addressed to the people of Syria and expressed her appreciation for the peacemaking ministry of the Russian Orthodox Church and other traditional religious communities.

As Ms Hadiya Abbas noted, the situation in the country is still grave due to the actions of international terrorists. The head of the Syrian Parliament emphasized that the long-established religious contacts between the peoples of Russia and Syria fostered the development of relationships between the two countries and peoples in various spheres, helping to oppose extremism.

Metropolitan Hilarion wished every success and God’s help to the first female speaker of the Syrian Parliament and assured his guests that the Moscow Patriarchate would continue to give all-round support to the people of Syria.