Source: DECR
Natalya Mihailova | 26 August 2017
On 24 August 2017, Metropolitan Hilarion of Volokolamsk, chairman of the Moscow Patriarchate’s Department for External Church Relations, attended the 38th Meeting for Friendship Amongst Peoples organized by the “Communion and Liberation” Catholic association of laypeople in Rimini, Italy, on 20-26 August 2017. 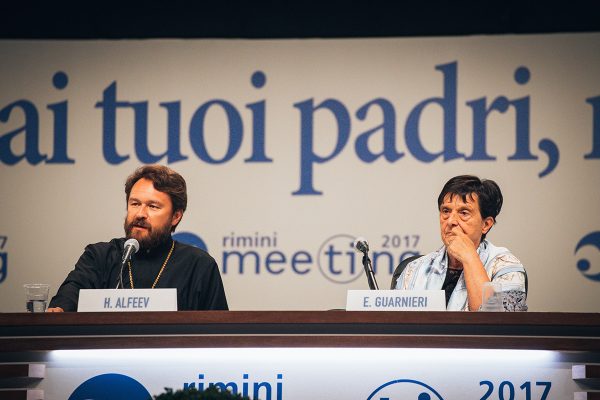 As part of the forum, held annually since 1980, various exhibitions, round table discussions, concerts and other cultural events are held, dedicated to the most important events, from the Christian perspective, of today’s life. Up to 800 hundred people attend the meeting every year. Among those who took part in the previous forums were Pope John Paul II, Mother Teresa of Calcutta, the 14th Dalai Lama, and other religious leaders, thinkers, politicians and cultural figures.

The following words from Goethe’s “Faust” – “What you inherit from your father must first be earned before it’s yours” – were chosen as this year’s meeting. The heritage and the experience accumulated by the previous generations were the central topic of the forum.

Metropolitan Hilarion, accompanied by Mrs. Emilia Guarnieri, President of the Meeting for Friendship Amongst Peoples, visited one of the major exhibitions of the forum, dedicated to the centenary of the tragic events in the Russian history and entitled “Russia in 1917. Shattered dream of ‘a world never seen before’.”

In the evening of the same day, at the main conference hall that can seat up to two thousand people, Metropolitan Hilarion delivered an address on the Role of the All-Russian Local Council of 1917-1918 in the Revival of the Russian Orthodox Church. Having noted the importance of the Council that had restored the Patriarchate and preserved the unity of the Church in the midst of persecutions, Metropolitan Hilarion focused on the heroism of martyrs and confessors, many of whom had participated in the Council. Thanks to their fortitude and faithfulness to Christ even unto death, the Russian Church managed to withstand persecution and revive 70 years later. The legacy of the Council of 1917-1918 and its prominent participants – hierarchs, clergymen and laypeople – became a source of inspiration for new generations of the faithful in the course of the ongoing revival of the Russian Church that has already been called “the second Baptism of Russia.”

The DECR chairman was accompanied on his visit by Rev. Alexy Dikarev.