Source: DECR
Natalya Mihailova | 04 June 2014
On 2 June 2014, Metropolitan Hilarion of Volokolamsk, chairman of the Moscow Patriarchate’s Department for External Church Relations (DECR), arrived in Minsk with the blessing of His Holiness Patriarch Kirill of Moscow and All Russia to take part in the 4th European Orthodox-Catholic Forum. 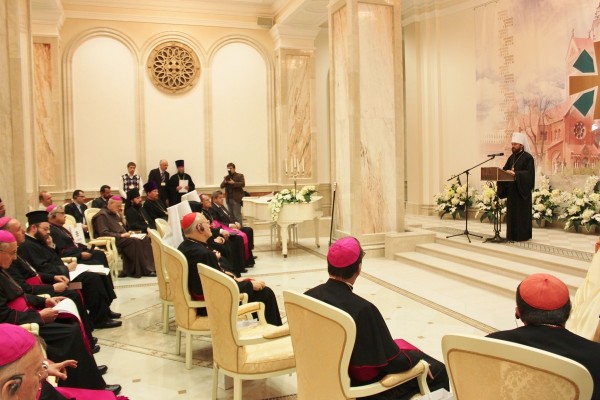 Upon his arrival in the capital of Belarus, Metropolitan Hilarion visited the Minsk Diocesan Administration and met with Metropolitan Pavel of Minsk and Slutsk, Patriarch Exarch of All Belarus.

The 4th European Orthodox-Catholic Forum on ‘Religion and Cultural Pluralism: Challenges for the Christian Churches in Europe’ opened in the conference hall at the Memorial Church of All the Saints in Minsk in the evening of June 2. Taking part in the forum are bishops of the Orthodox and Catholic jurisdictions of Europe, clergymen and theologians.

Mr. Leonid Guliako, envoy for religious affairs and nationalities of the Republic of Belarus, read out greetings from the Byelorussian President, Alexander Lukashenko.

Metropolitan Philaret (Vakhromeyev), Honourary Exarch of All Belarus, greeted the delegates, noting the importance of the Orthodox-Catholic dialogue, and wished them fruitful work.

Metropolitan Gennadios of Sassima (Ecumenical Patriarchate), co-chairmen of the Forum from the Orthodox side, read out greeting from Patriarch Bartholomew of Constantinople.

Message from Cardinal Pietro Parolin, the Vatican’s Secretary of State, with greetings from His Holiness Pope Francis, was read out by Archbishop Claudio Gugerotti, Apostolic Nuncio to Belarus.

Metropolitan Pavel of Minsk and Slutsk greeted the participants on behalf of the Russian Orthodox Church. He called the work for the preservation of moral evangelical values a major task of the present state of the Orthodox-Catholic cooperation. The fact of holding the dialogue in Belarus is symbolic, as Belarus has given a traditional example of inter-confessional peace and successful cooperation among representatives of different confessions.

Metropolitan Hilarion noted in his welcoming speech that the meetings of representatives of the Orthodox and Catholic jurisdictions of Europe, the first of which took place in 2008, have become quite regular. He underscored that in the present situation we cannot limit ourselves merely to the discussion of theoretical issues, but have to interact on a practical level too. He said that the tragedy in Ukraine has not only political, but also religious dimension. Sadly, the Greek Catholics have played ‘a very destructive role in allowing this situation to develop. The words of their leading archbishop, hierarchs and clergy and an extremely politicized position have brought about the polarization of society and a worsening of the conflict which has already led to numerous victims.’

Metropolitan Hilarion continued to say that such actions ‘have caused great damage not only to the Ukraine and her citizens, but also to the Orthodox-Catholic dialogue. All of this has put us back a great distance, reminding us of the times when the Orthodox and Catholics viewed each other not as friends but as rivals.’

‘Today once again it has been all the more obvious what the Orthodox knew – that the Unia was and, unfortunately, remains a special project of the Catholic Church aimed at undermining canonical Orthodoxy. It was here, in the country of Byelorussia, that the notorious ‘the Union of Brest’ of 1596 was concluded and which brought untold suffering to the Orthodox population of these lands.’

Metropolitan Hilarion appealed to all partners in the dialogue ‘to do all that is possible to cool down the “hotheads” among the Uniates, to halt the actions of the Greek Catholics in making the crisis in the Ukraine worse.’

He thinks that ‘today one part of the Catholic Church is employing all its strength, talents and resources in strengthening Orthodox-Catholic interaction, while another (even though it enjoys autonomous status) is doing everything possible, as in former unfortunate times, to drive the wedge of distrust and enmity between Orthodox and Catholics.’

Addressing the participants also were Archbishop-Metropolitan Tadeusz Kondrusiewicz of Minsk and Mogilev; Bishop Alexander Kashkevich of Grodno, chairman of the Catholic Episcopal Conference of Belarus; and Cardinal Péter Erdö, Archbishop of Esztergom-Budapest, co-chairman of the forum from the Catholic side. He donated a particle of relics of St. Stephan, King of Hungary, to the Byelorussian Exarchate.

The opening session was concluded by a concert performed by a male choir of the Memorial Church of All the Saints and by a reception given on behalf of the Byelorussian Exarchate.

The European Orthodox-Catholic Forum was instituted in 2008 on the initiative of Cardinal Péter Erdö, Archbishop of Esztergom-Budapest, and Bishop Hilarion of Vienna and Austria (now Metropolitan of Volokolamsk and chairman of the Moscow Patriarchate’s Department for External Church Relations).

Discussed at the three previous forums held in Trent, Rhodes and Lisbon, were the problems of the family, Church-state relations, and the economic crisis and poverty.

The Forum will work till June 5.

Halloween: Just Another Day Outside Paradise

Saint Paisios of Mt. Athos walked his occult-dabbling guest down the path…

Will Our Names Be Written In…

Metropolitan Amfilohije of Montenegro and the…

Archbishop of Cetinje, Metropolitan of Montenegro and Exarch of the Holy Throne…

Most viewed articles
Turks Erased Frescoes in Chora Church261
Why Do We Need Morning and Evening Prayers?235
Don’t Turn Back142
Report Details the Horrific Experiences of Christians in North Korea121
Beauty and Iconoclasm – Where We Find God95
Metropolitan Amfilohije of Montenegro and the Littoral Reposes in the Lord95
Condolences of Patriarch Kirill over the Death of People as a Result of Terrorist Action in Nice90
What Is the Difference Between Fear of God and Panic?82
Will Our Names Be Written In Heaven?4
Lessons from the Lives of the Saints1
Most popular authors
Pravmir.com team567
Priest Andrei Chizhenko317
Protopresbyter Themistoklis Mourtzanos142
Archpriest Stephen Freeman95
Fr. James Guirguis5
Archpriest Thaddaeus Hardenbrook1