Source: DECR
Natalya Mihailova | 24 July 2014
On 21-22 July 2014, Metropolitan Hilarion of Volokolamsk, chairman of the Moscow Patriarchate’s Department for External Church Relations, visited Kyrgyzstan with the blessing of His Holiness Patriarch Kirill of Moscow and All Russia. 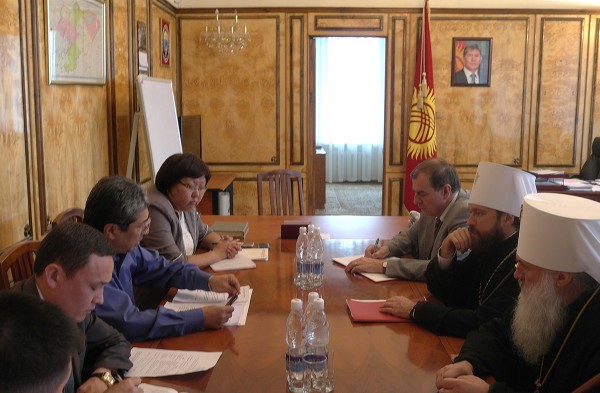 “You are performing a very important ministry in the land where Orthodoxy has existed for a long time, over 140 years, to say nothing of the ancient roots of Christianity that this land has. The Russian Orthodox Church here is not a foreign or missionary structure, but a part of the Kirghiz people’s national identity. It is not fortuitous that the diocese of the Russian Orthodox Church is registered here as a religious structure of this country. You should realize that you are a part of this land and pastors for the people who live here.

As the DECR chairman emphasized, the mission of clergymen is to take spiritual care of and render moral support to their flock which includes the Russians and people of other nationalities. The faithful need to feel that the Church is taking care of them. They do not have to worry about their own and their children’s future, because they have not only their physical homeland, but also their spiritual homeland – the Church, Metropolitan Hilarion noted.

Speaking about the importance of pastoral service, Metropolitan Hilarion noted a special role of priest as celebrant of the Sacraments, as a tool of sanctification, transfiguration and, finally, deification of people. The priest’s strength for serving people comes from praying before God’s Altar, from celebrating the Eucharist, the Sacrament of the Church, through which he is fully united with God.

“If such a period comes that we feel despondent and desperate, we must pray zealously to the Lord, asking him to grant us strength and certitude necessary for our ministry,” Metropolitan Hilarion said. “It is not self-confidence or self-reliance, it is the certitude that our mission is important for us, that it has been entrusted to us by God, and that not only we need the Church, but the Church needs us too, and that not only we need the Lord, but the Lord needs us too. Had it not been the case, He would not have called us and entrusted us with this ministry.”

“You know that the Russian Orthodox Church is multiethnic, her faithful live in various countries,” the DECR chairman continued. “Yet, your country can be called a forefront in every sense of the word. You are a vanguard of a huge army called the Russian Orthodox Church. You live among people who confess another faith. It imposes a certain responsibility on you, since, on the one hand, our mission is to bear witness to the truth of Christ’s faith and to preach the Gospel, regardless of a current situation or circumstances, and on the other hand, we must live in peace with all people, as the Holy Scripture commands us to do.”

“May the Lord Himself enlighten those people whom we meet with the light of His truth and faith. We must remember that our human potential is limited, while God’s power has not limit. If we in our service will be open enough to what God wants to send us and say to us, then He Himself will speak and act through us. The best we can do in our life is to open our soul to God, so that He could work miracles and enlighten people,” Metropolitan Hilarion added.

Metropolitan Vikentiy thanked the DECR chairman for his address and said, in particular, “We know you as an outstanding preacher, we watch your TV programmes, in which you give exhaustive answers to any question. We are happy to be here with you.”

Accompanied by Metropolitan Vikentiy, Metropolitan Hilarion visited the Cathedral of the Holy Resurrection in Bishkek and venerated its shrines.