Metropolitan Hilarion: the whole experience of our Church and our own experience of life in the Church attest that Christ has Risen

Source: DECR
Natalya Mihailova | 29 April 2014
On April 27, 2014, St. Thomas Sunday, Metropolitan Hilarion of Volokolamsk, head of the Moscow Patriarchate’s department for external church relations, celebrated the Divine Liturgy at the church of Our Lady the Joy to All the Afflicted-in-Bolshaya Ordynka, in Moscow. 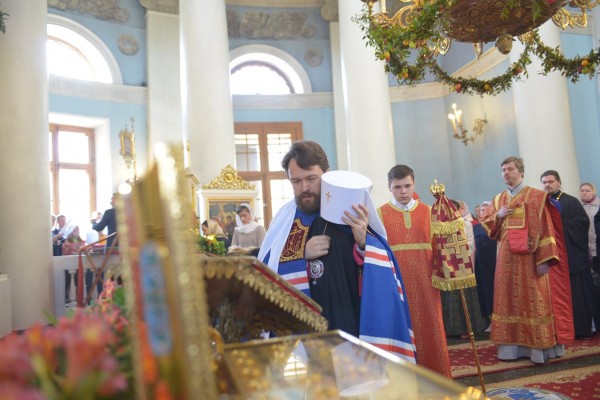 On April 27, 2014, St. Thomas Sunday, Metropolitan Hilarion of Volokolamsk, head of the Moscow Patriarchate’s department for external church relations, celebrated the Divine Liturgy at the church of Our Lady the Joy to All the Afflicted-in-Bolshaya Ordynka, in Moscow.

After the liturgy, His Eminence addressed an archpastoral homily to the congregation, focused on the truth of the Resurrection. “We can see from the Gospel that not only Thomas but also some other apostles had doubts about the Resurrection of our Saviour, while the disciples confessed Him not simply as Lord, that is Master, but also God Incarnate. This amazing combination of doubt and faith in the Divinity of Jesus Christ haunted Christians through centuries as some worshipped Him as God and Saviour while others doubted the truth of the Resurrection; some would build the Church of God and shed their blood for the gospel of Christ while others would create their own teachings, deviate from the Church and create schisms and sects”.

There were many such people in the modern time, he said, including the 19th century positive philosophers, who, while recognizing the existence of God, believed it impossible for a human being to be raised from the dead and for God to become man. They created their own versions of Christianity, as our great writer Leo Tolstoy did. For him, Christ was simply a teacher of morality, like Buddha or Confucius.

Such attempts, he said, were made and will be made, “but we, believers in Christ, know that Jesus Christ is not only our Lord and God and that He was raised from the dead. We know it not because we have read it in books but because the whole experience of our Church and our own experience of life in the Church attest that Christ has risen. We feel it with all our nature when the Pascha of Christ comes. We see with our mental eye that our Lord Jesus Christ has been raised from the dead because He is God Incarnate and this is for nothing but opening to each of us the way to resurrection.

“The Church has been created to raise the dead and heal the sick. How many people have received God’s grace in the Church – the grace that heals every disease and makes the dead alive. Who many people have come to the Church being spiritually dead but through their participation in the life of the Church and its sacraments, they have been raised to a new life to rise already here, on earth, to be reborn, to live here for some more time and then, like the Lord Himself, to go through death and to rise to the new eternal life!”

In his capacity as chairman of the ROC’s Dissertation Council, Metropolitan Hilarion invested with the doctoral cross Rev. Aleksey Kolcherin who has recently defended his doctoral dissertation. Until recently, he said, there were no dissertation councils in the Russian Church and no people who wrote doctoral theses. The Doctor’s degree was granted vary rarely and was rather an honorary title than recognition of a work that makes a weighty contribution to the development of theology. Nowadays there is this opportunity for graduates of theological academies and secular universities to write a doctoral thesis, to go through a difficult procedure of defence and to become Doctors of Theology, subject to approval by His Holiness Patriarch Kirill of Moscow and All Russia.