Source: Notes on Arab Orthodoxy
The protections of Christians falls under the protection of Middle Eastern people, whether Christian or Muslim, who are suffering the consequences of terrorism and extremism.
Natalya Mihailova | 09 September 2014 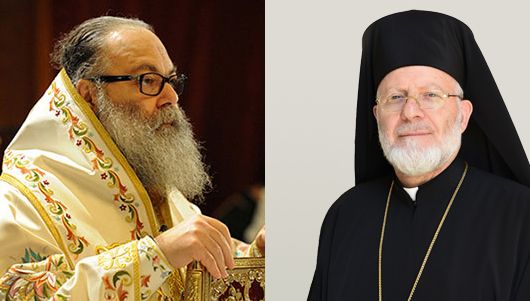 His Beatitude John X, Greek Orthodox Patriarch of Antioch and All the East has delegated His Eminence Joseph (Zahlawi), Metropolitan of New York and All North America to represent him at the conference “In Defense of Christians“, which will take place in Washington, DC on the 9th to the 11th of September, 2014.

Metropolitan Joseph will relay to those gathered at the conference the position of the Antiochian Church, which regards Christians as a fundamental component  of the Middle East whose fate is tied to the fate of all their brothers in citizenship.

Thus their defense will come fundamentally through the establishment of a just peace in the region and the strengthening of the values of true citizenship, responsible freedom and social, economic, and cultural justice in the countries to which they belong.

This position stresses that Christians reject any evacuation or exodus and that they shall remain in their nations as apostles of love and peace.

It will likewise affirm that the protections of Christians falls under the protection of Middle Eastern people, whether Christian or Muslim, who are suffering the consequences of terrorism and extremism.

All of this requires serious and honest work with all people of good will and with all segments of this Middle East, especially the Muslims, our brothers in citizenship who, in turn, are enduring the consequences of extremism, in order to eradicate Takfirism and fanatical movements and to establish tolerant thought that respects diversity and the freedom of the other, especially freedom of belief.

The Greek Orthodox Patriarchate of Antioch and All the East is determined to do whatever is necessary to establish a logic of rootedness in the land as part of the mission with which she has been entrusted by God as a witness to her love for humankind and her preparedness to serve.