Metropolitan Nicholas of Mesogeia and Lavreotiki: The time has come to rise up 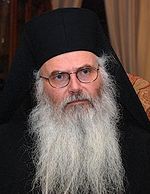 The Metropolitan has given a very negative assessment of the policy of the Greek government, which is constantly imposing ever new taxes on its citizens: “Salaries and pensions have been reduced, unemployment has increased and many have fallen into poverty. And at the same time they are threatening us with demands to pay an additional tax on our homes,” reports Agionoros.ru.

Metropolitan Nicholas stated that the Church will not leave its flock in trouble: “I would like to address everybody who cannot pay the special property tax (see note 1, at the bottom). Don’t fall into despair! Know that we will stand all together shoulder to shoulder and will shout out: “Try taking from someone who has nothing!” (see note 2, at the bottom). Let them finally understand that we cannot take it any longer. We are on the brink. But we don’t want them to destroy us altogether”.

Speaking to his flock, Metropolitan Nicholas promised: “If they start disconnecting your electricity, then we will turn it off in all the churches. We will perform weddings by candlelight and will serve liturgies with tears in our eyes”. The Metropolitan believes that the people cannot stand it any longer and he has called on them “to rise up, show your strength and take responsibility for your lives into your own hands”. “Certain people (the politicians) have discredited us before the whole world and have led us to the jaws of the beast. Perhaps they have done this out of foolishness, but more likely they are implementing their own dubious interests. The time has come when those who make decisions should understand what is happening in our homes, in the streets and in the everyday life of ordinary people”.

Commenting on his decision to make a special petition, Metropolitan Nicholas said that in recent days he had received hundreds of letters and calls with requests for support. In his petition the Metropolitan suggests the following solution: “We must shout into the ears of those in power: Stop! We cannot bear it any more. Look for other ways to find a solution to the crisis… It is time to rebel. Everything must change. And if they do not want to change anything then we must do it ourselves.”

Note 1. In Greece this special property tax has already been nicknamed haraj (after the poll tax that Orthodox Greeks paid under the Ottoman Yoke). Refusal to pay this tax, which is unbearable for many, results in your electricity being disconnected.

Note 2. From the dialogue between Menipp and Haron (Lucian: Conversations in the Kingdom of dead).