Metropolitan Niphon of Philippople: The word of His Holiness Patriarch Kirill draws a wide response in the world

Source: DECR
Natalya Mihailova | 05 February 2015
On February 1, 2015, the 6th anniversary of the enthronement of His Holiness Patriarch Kirill of Moscow and All Russia, after the festive divine service at the Church of Christ the Saviour, there was a fraternal repast during which congratulations were extended to His Holiness by Orthodox hierarchs, Russian Federation ministers and Federal Assembly deputies. 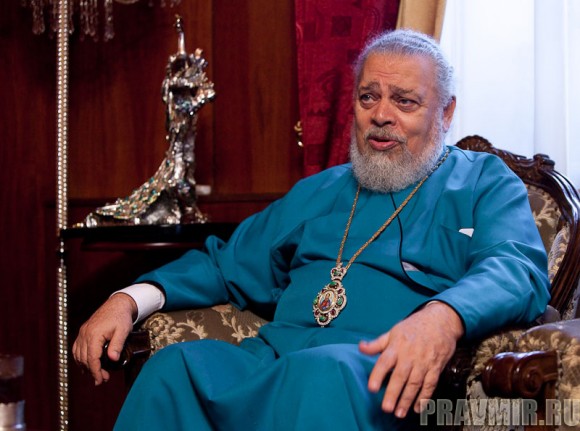 Extending congratulations to His Holiness on behalf of Local Orthodox Churches’ representatives to the Moscow Patriarchal throne, Metropolitan Niphon of Philippople, Patriarchate of Antioch, recalled the words Patriarch Kirill said on the day of his enthronement: ‘A patriarch should see to it that every personality in all its uniqueness should find its place in the church organism without letting differences break the spirit of love’, and noted that this judgment is embodied today in the life of the Russian Orthodox Church.

‘The meaning of today’s celebrations for the Orthodox world lies in your care for the unity of Universal Orthodoxy. Your open dialogue during your primatial visits to old Patriarchates underlines the common Orthodox response to the challenges of time in which religion is ousted from people’s life while moral values are subjected to radical revision’, Metropolitan Niphon said.

Patriarch Kirill’s words that ‘there are no boundaries for love’ and his other speeches during his visit to Antioch and calles to young theologians to meet and exchange their spiritual experience as well as his spiritual, political and material aid to Christians in the East, the metropolitan said, have drawn a wide response in the world, showing that visits of Primates have a great importance for Churches and their peoples.

‘Seeing and feeling your concern for the consolidation of pan-Orthodox unity and Universal Orthodoxy, we as representatives of Orthodox Churches to your throne, testify that the day of your ascension to the Moscow Patriarchal throne has become an epoch-making event and a great feast’, Metropolitan Niphon concluded.