Source: DECR
Natalya Mihailova | 06 May 2015
His Beatitude Onufry, Metropolitan of Kiev and All Ukraine, arrived in Varna on May 1, 2015, at the invitation of His Holiness Patriarch Neophytos of Bulgaria, for the celebrations marking the 1150thanniversary of the Baptism of Bulgaria. 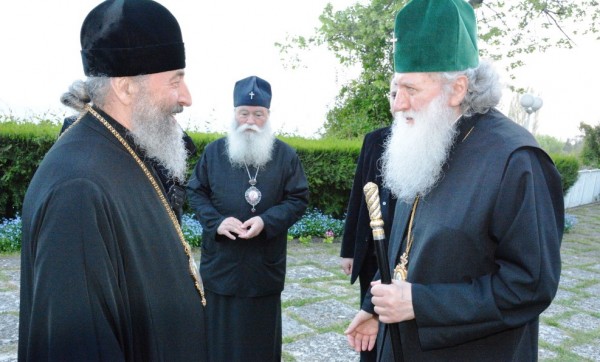 At the Varna airport, the guest was welcomed by Metropolitan John of Varna and Veliki Preslav and Archimandrite Philip (Vasiltsev), rector of the Sofia representation of the Russian Orthodox Church.

Later that day, Metropolitan Onufry had brief meetings with Patriarch Neophytos, Simeon Saxe-Coburg-Gotha, head of the Royal House of Bulgaria, and the Ukrainian ambassador to Bulgaria M. Baltacha.

The 1150th anniversary celebrations were held on May with the participation of representatives of Local Orthodox Churches in the city of Pliska, the old capital of Bulgaria, where the Bulgarian people were baptized in 865, under King Boris.

On May 3, the celebrations will continue in Varna, the press service of the Ukrainian Orthodox Church reports.