Metropolitan Onufry of Kiev and all Ukraine visits Greece

Source: DECR
Natalya Mihailova | 22 March 2016
The Primate of the Ukrainian Orthodox Church, His Beatitude Onufry, Metropolitan of Kiev and All Ukraine, visited Greece. 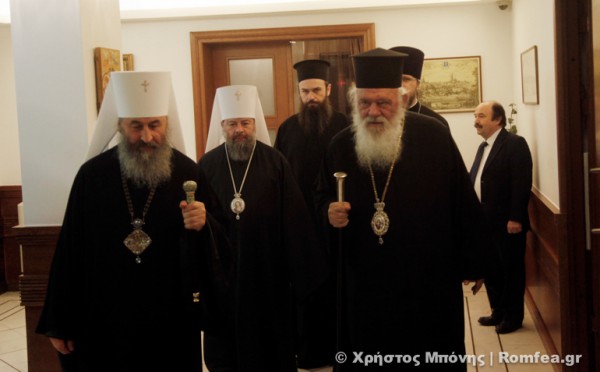 His Beatitude was accompanied by Metropolitan Mitrofan of Lugansk and Alchevsk, head of the UOC department for external relations, and Archpriest Nikolay Danilevich, deputy head of the department.

On March 15, 2016, His Beatitude attended the reception given on the occasion of the Sunday of Orthodoxy by the Ukrainian Embassy in Greece. During the event, he addressed His Beatitude Jeronymos II, Archbishop of Athens and All Greece, greeting him on the festive occasion.

The reception was also attended by Mr. Yannis Amanatidis, deputy foreign minister, representatives of the Greek Orthodox Church, members of the UOC delegation, and educational and cultural figures.

On his part, Archbishop Jeronymos expressed support for and best wishes to Metropolitan Onufry and all the Ukrainian people.

They also discussed the development of humanitarian cooperation between Ukraine and Greece.

During their stay in Greece, the UOC delegation made on March 16 a pilgrimage to the burial place of St. Nectarios of Aegina on Aegina Island, one of the most venerated Greek saints of the modern time.

After venerating St. Nectarios’s relics, the acathistos to the saint was served, during which Metropolitan Onufry lifted up fervent prayers for peace in Ukraine, the Information and Education department of the Ukrainian Orthodox Church reports.