The church dedicated to St. John the Theologian was built in the complex of Odessa National University.
Pravmir.com team | 11 October 2020 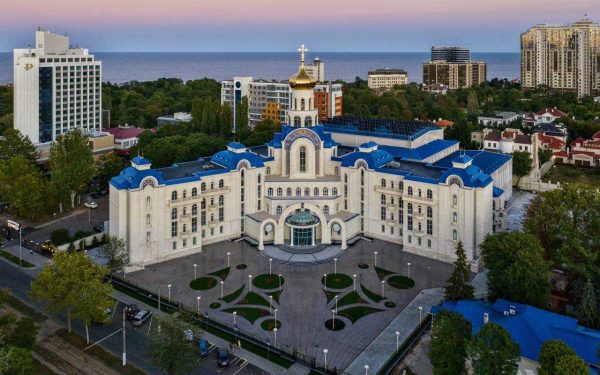 The consecration of the church in honor of the Apostle John the Theologian, built in the complex of Odessa National University, was performed by His Beatitude, Metropolitan Onuphry of Kiev and All Ukraine, on October 9, 2020, the commemoration day of the Holy Apostle and Evangelist John. After the rite of great consecration, the Primate of the Ukrainian Orthodox Church officiated the Divine Liturgy at the church, reports the Information and Education Department of the UOC.

Among the concelebrants were Metropolitan Agafangel of Odessa and Izmail, Metropolitan Anthony of Boryspil and Brovary, guests, and clerics of the Odessa diocese.

During the service, prayers were offered for stopping the spread of the coronavirus infection and for the doctors who are fighting for life and health of their patients.

After the liturgy, His Beatitude Metropolitan Onuphry congratulated those present on the feast day and told them about the life of St. John the Theologian in his sermon.

The archpastor thanked those who participated in the construction of the church for their hard work and awarded the benefactors with church awards. In particular, he awarded Sergei Kivalov, President of the National University “Odessa Law Academy”, who was the initiator of the construction of both the university and the church. Then Metropolitan Onuphry took part in the grand opening of Odessa National University.

Odessa National University is the largest university in Odessa, 1200 students can study here. The university was built on the site of the family church of a prominent public figure of the 19th century, Grigory Marazli. There are two churches in the complex: one is in honor of the Apostle John the Theologian and the other is dedicated to St. Sergius of Radonezh.

Most viewed articles
The Trap of Religiosity113
Patriarch Daniel explains why the Hesychasts were the most sought-after spiritual fathers and what is a prayerful reason96
Bishop Nicholas of Manhattan visits Holy Cross Monastery in West Virginia84
Lord, Save Me!73
Why Everything Is Important (but not the stuff you might imagine)63
Condolences of Patriarch Kirill over the death of believers in the fire that broke out in Abu-Seifein Church in Cairo45
25 Years of Help: the Ship-Church Goes On its 25th Voyage to Distant Villages44
St. Tikhon Church to host Liturgical Music Symposium in October 202240
Ukrainian Church Celebrates Metropolitan Onuphry’s 8th Anniversary of His Enthronement21
Most popular authors
Pravmir.com team234
Vasileios Stoyiannos113
Aurelian Iftimiu96
Fr. Theodore Stylianopoulos73
Archpriest Stephen Freeman63