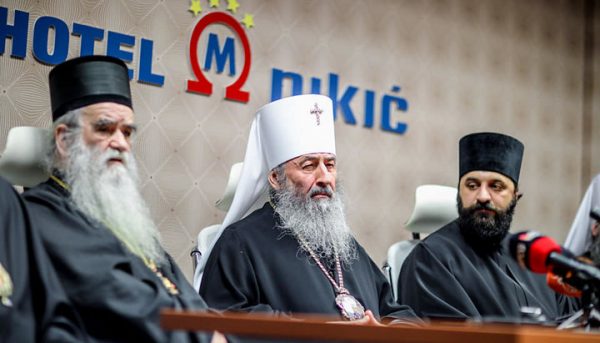 His Beatitude Onuphry at a press conference in Podgorica. Photo: Bishop Victor (Kotsaba)

At a press conference in Podgorica on February 28, broadcast live by the Union of Orthodox Journalists, His Beatitude Metropolitan Onuphry of Kiev and All Ukraine noted that, despite the persecution against it from the state in recent years, the canonical Ukrainian Orthodox Church has only grown stronger and more vibrant.

He also noted that the Montenegrins great display of faith in support of their Church in recent months is inspiring for the Ukrainian faithful.

He also addressed Wednesday’s fraternal gathering in Amman, Jordan: “Regarding what we would have liked to have seen in the communique but did not see, I can say for myself personally—I would have liked for the decisions about Ukraine to have been more explicit.”

However, he hopes for it to be further addressed at future meetings: “The question about Ukraine at the Amman gathering calls for continued dialogue with all Orthodox Churches.”

Concerning Ukraine, the communique states: “Concerning the current ecclesiastical situation in the Ukraine the participants also recognised that a pan-Orthodox dialogue is necessary for healing and reconciliation.”