Source: Antiochian Orthodox Christian Archdiocese of North America
Natalya Mihailova | 23 June 2014
June 19, 2014: His Eminence, Metropolitan Silouan of Buenos Aires and all Argentina and Patriarchal Vicar of North America visited His Eminence, Archbishop Demetrios of the Greek Orthodox Archdiocese of America, before departing for Lebanon for the Antiochian Unity Conference and Holy Synod meeting. 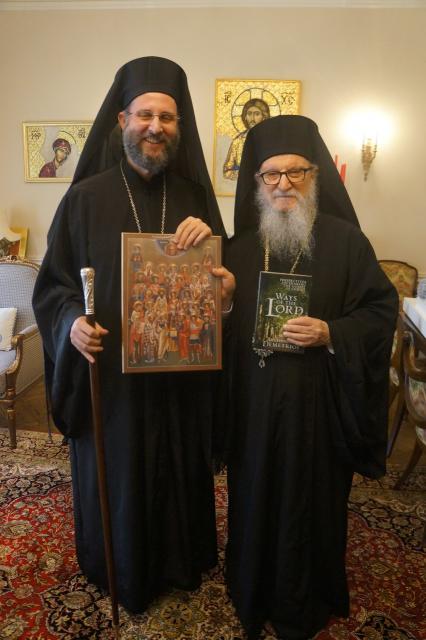 His Eminence, Archbishop Demetrios welcomed Metropolitan Silouan and the Vicar-General, Fr. Thomas Zain, at the Archdiocese Headquarters in Manhattan.

After a brief tour by the Ecumenical Officer, Archimandrite Nathaniel Symeonides, the two Metropolitans discussed many issues including the two abducted bishops and the situation of Christians in the Middle East. Archbishop Demetrios thanked Metropolitan Silouan for the Holy Synod of Antioch’s decision to resume participation in the Assembly of Bishops around the world. The two also discussed the situation of the Orthodox Church in South America and recalled their first meeting together during the recent Synaxis of the heads of the Orthodox Churches in Constantinople at which both were present. The two exchanged gifts and then all enjoyed a pleasant lunch together where everyone continued the earlier conversations.

A planned visit to HIs Eminence, Archbishop Justinian of the Russian Orthodox Church earlier in the day had to be postponed due to a scheduling conflict.

Most viewed articles
Hierarch from North Macedonia Gives Advice to the Ukrainian Orthodox Church104
Patriarch Kirill: We In No Way Question the Healing Power of the Holy Mysteries of Christ!94
Participating in God’s Vision89
Lessons from Saint Mary of Egypt83
Can God Break A Promise?80
First Orthodox Prayer Book in Portuguese Published in Portugal79
Patriarch Kirill: Faith in the Lord Gives Us the Ability to Distinguish Between Good and Evil77
Ethiopian Patriarch Thanks Patriarch Kirill For the Support During the Persecution73
Representative of Russian Patriarch Delivers Rehabilitation Facilities to Children in Syria34
On Feeling Forsaken10
Most popular authors
Pravmir.com team462
Priest Dustin Lyon89
Justin Doty83
Fr. James Guirguis80
Archpriest John Moses (+2019)12