Source: DECR
Natalya Mihailova | 12 December 2014
The visit of His Beatitude Tikhon, Archbishop of Washington, Metropolitan of All America and Canada, was concluded on December 10, 2014, after a stay in St Petersburg. 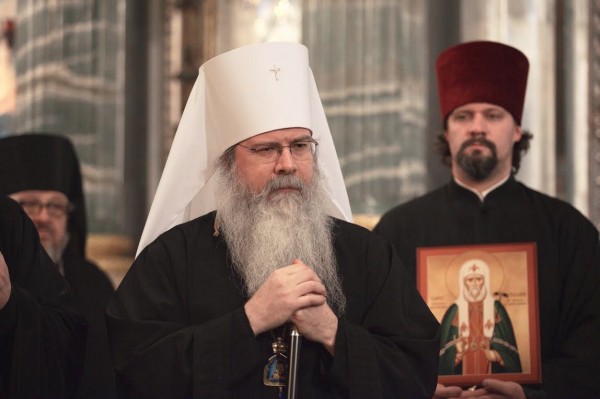 The Primate of the Orthodox Church in America and his official delegation arrived in the northern capital on December 7. The delegation was accommodated at the Novodevichy Convent of the Resurrection.

On December 8, the guests visited St Isaac’s, the church of the Holy Resurrection-on-the-Blood, the St Alexander Nevsky Laura, the Naval Cathedral of St. Nicholas in Kronstadt and the memorial quarters of the Holy Righteous Ioann of Kronstadt.

On December 9, Metropolitan Tikhon and his delegation were introduced to the cultural treasures in the State Hermitage, the largest museum in Russia, which has marked its 250th anniversary.

His Beatitude also visited the Memorial Cathedral of Ss Peter and Paul in the Ss Peter and Paul Fortress, the Ioann Convent on the Karpovka, in which the relics of the Holy Righteous Ioann of Kronstadt are kept, and the Chapel of the Blessed Xenia in the Smolensk Cemetery.

On December 10, His Beatitude gave his benediction to the sisters of the Convent of the Resurrection, in which the OCA delegation stayed. As a token of his visit, the sisters presented Metropolitan Tikhon with a cross and a pectoral icon.

At Pulkovo airport, the Primate and the delegation of the Orthodox Church in America were seen off by Metropolitan Varsonofy, Bishop Nazary of Kronstadt, Bishop Ioann of Naro-Fominsk, administrator of the Patriarchal Parishes in the USA and St. Petersburg clergy.

In recognition of their work to strengthen fraternal relations between the Russian Orthodox Church and the Orthodox Church in America, Metropolitan Tikhon gave high church awards to Bishop Ioann, Archimandrite Alexander (Pikhach), D. Petrovsky, a staff member of the DECR, I. Sudosa, head of the St Petersburg diocesan protocol service, and V. Zavalny, St Petersburg branch of the DECR.

Most viewed articles
On Feeling Forsaken177
Maronite Patriarch Thanks Russian Patriarch for His Support for Christians in the Middle East112
Food for the Journey82
Athens and Jerusalem: the Role of Philosophy in Faith, with Analysis by St. Gregory Palamas81
The pandemic is a significant examination for us all, Transylvania Metropolitan says65
Fire Destroys Main Building with the Church of St. Peter Convent in Pavlodar61
Orthodox Priest Rescues Two People from Fire in Constanța50
We Are Not Saint Mary of Egypt (But We Can Still Repent)14
Most popular authors
Archpriest John Moses (+2019)177
Pravmir.com team173
Aurelian Iftimiu115
Dcn. Michael Schlaack82
Eric Hyde81
Archpriest Geoffrey Korz14