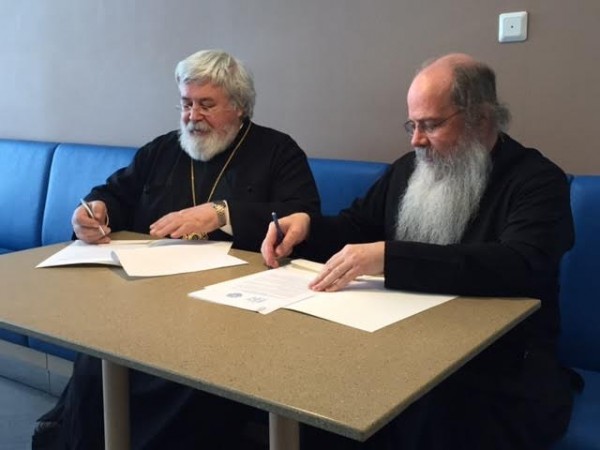 Prior to his return to the US after a week-long visit to the Orthodox Church in Finland, His Beatitude, Metropolitan Tikhon signed an agreement with His Eminence, Archbishop Leo of Karelia and All Finland pledging mutual cooperation in five important areas of Church life.

Metropolitan Tikhon led a delegation from the Orthodox Church in America on his visit to the Finnish Church during the last week of February 2016.  [See related story].

Additional information and a photo gallery highlighting the visit will be posted shortly.

The text of the agreement reads as follows.  A PDF is also available.

In concluding the visit of a delegation led by His Beatitude, Metropolitan Tikhon of the Orthodox Church in America to Archbishop Leo of Karelia and All Finland and the Orthodox Church of Finland, and having rediscovered our common historical roots and the shared present realities of the situations in which our churches minister we resolve to continue and deepen our relationship by cooperating in the five following areas:

1. Seminary exchange programs: our contemporary western and increasingly secular societies lead us to seek exchanges of faculty and students through whom we can share our resources and experiences in the areas of pastoral training and applied theology. This will help advance the mission of the Orthodox Church in the lands in which our Lord and Savior Jesus Christ has planted us as his witnesses.

2. Dialogue on ethical issues: common reflection and dialogue in the field of Orthodox Christian ethics would be useful to address the challenges posed by the societies in which our two Churches serve. Topics that are now relevant include an understanding of the family, sexuality, respect of life both in its early and late phases, and questions of bioethics. The parishes, local communities and countries we serve are not isolated from these new developments. We need fresh perspectives stemming from genuine Orthodox thinking to both engage with and respond to these questions.

3. Pastoral Care and work with Nordic indigenous peoples: we affirm the need to strengthen the co-operation of our Northern areas – Finnish Lapland and the Oulu Diocese in Finland, with the native peoples of Alaska and Canada.  We share a common concern for the indigenous people in the North and together we commit to finding new and creative ways to both minister to them, and for them to share their experiences. Among the areas of mutual concern is climate change. This has its most significant effects in the Arctic, where people are the least responsible for the changes.

It is also good to remember, that the most significant monasteries of Old Russia emerged in the Northern region. The severe nature of the North contributed to the ascetic life of many saints such as Herman, Juvenaly, Innocent and Jacob of Alaska, Sergius and Herman of Valaam, Arseny of Konevets, Alexander of Svir, Trifon of Pechenga, Herman, Zosima and Savvati of Solovetsk, Cyril of Beloozero and many others. Powered by their holy prayers we need to promote the co-operation of our Northern areas.

4. Youth exchanges: our churches have a long history of working together on youth leadership training, education and exchange. Through greater connections between our youth we can ensure a long and fruitful relationship between our Churches.

To take these initiatives forward and oversee their development we appoint a joint working group representing our two Churches. The initial members of this working group are Metropolitan Elia of Oulu and Archpriest Rauno Pietarinen (Orthodox Church of Finland), and Archbishop Melchisedek of Pittsburgh and Western Pennsylvania and Archpriest John A. Jillions (Orthodox Church in America).