Source: OCA
Natalya Mihailova | 05 December 2014
On December 4, 2014, the Great Feast of the Entrance of the Mother of God into the Temple, His Holiness, Patriarch Kirill of Moscow and All Rus’ concelebrated the Divine Liturgy with His Beatitude, Metropolitan Tikhon of All America and Canada and His Grace, Bishop Alexander of Toledo and the Bulgarian Diocese, Chair of the Orthodox Church in America’s Office of External Affairs and Interchurch Relations, in the historic 15th century Patriarchal Cathedral of the Dormition in the Moscow Kremlin. 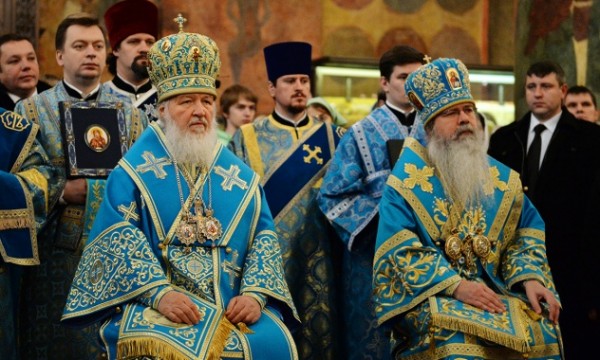 The day also marked the 97th Anniversary of the Enthronement of Saint Tikhon of Moscow, which took place in the same cathedral. Saint Tikhon, who served as Bishop, and later Archbishop, of North America from 1897 to 1907, is widely remembered for convening the First All-American Sobor in Mayfield, PA. 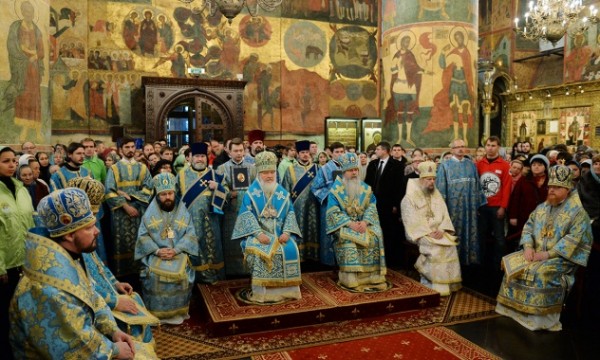 Also concelebrating were His Eminence, Metropolitan Hilarion of Volokolamsk, Chair of the Department of External Church Relations of the Moscow Patriarchate; His Grace, Bishop Sergiei of Zolnechnogorsk, Chair of the Patriarchate’s Administrative Secretariat; His Grace, Bishop Tikhon of Podolsk; His Grace, Bishop John of Naro-Fominsk, Administrator of the Patriarchal Parishes in the USA; Mitered Protopresbyter Vladimir Divakov, Secretary to Patriarch Kirill for the city of Moscow; and other area clergy. Members of the OCA delegation who concelebrated were Archimandrite Alexander, OCA Representative to the Moscow Patriarchate and Dean of the Church of the Great Martyr Catherine, Moscow; Archpirest John Jillions, Chancellor; Archpriest Eric G. Tosi, Secretary; Archpriest Nazari Polaitko, Secretary of the OCA Archdiocese of Canada; and Protodeacon Joseph Matusiak, Secretary to Metropolitan Tikhon. Also present were Protopresbyter Leonid Kishkovsky, OCA Director of External Affairs, and the lay members of the OCA delegation.

The choir of the Zaikonospassky Monastery, established in Moscow’s Kitai-Gorod quarter by Boris Gudonov in 1600, sang the liturgical responses.

Photos of the Divine Liturgy will be posted on the OCA web site as they are received.

Metropolitan Tikhon’s Greetings to Patriarch Kirill
Dormition Patriarchal Cathedral in the Moscow Kremlin
Great Feast of the Entrance of the Mother of God into the Temple
December 4, 2014

Your Holiness, Beloved Brother in the Lord and Concelebrant:

It is a profound joy to greet Your Holiness on this Feast of the Entrance of the Most Holy Mother of God into the Temple. Our concelebration gives expression to our unity in faith and love, and therefore witnesses to the Eucharistic unity of the Holy Churches of Russia and America. By our concelebration, by standing together before the Holy Altar, we bring to God both Russia and America. Together we ask God for the wisdom and grace to bring the Word of God to our societies and our world. 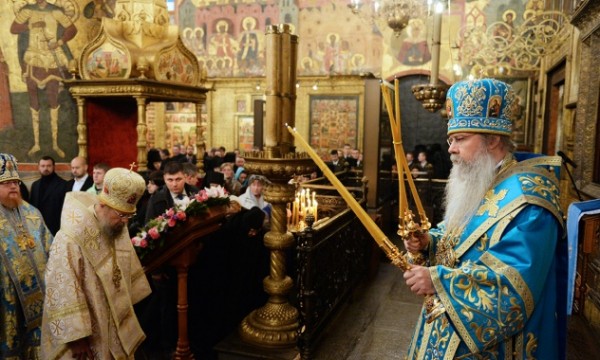 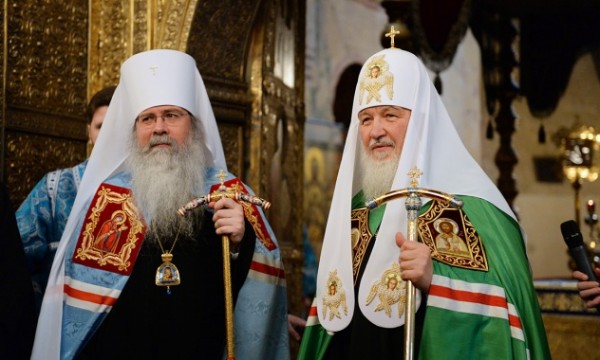 The history we have briefly described includes much suffering and many troubles, as well as many joys and achievements. The 20th century was a time of persecution for the Church of Russia, with many martyrs and confessors bearing witness to Christ. At the end of the last century, a time of renewal and rebirth began for the Church of Russia. Today, we see the Russian Orthodox Church doing its missionary work in Russian society, preaching the Word of God and serving the people in works of charity in the name of Christ.

Your Holiness, this Liturgy of the Feast of the Entrance of the Mother of God into the Temple in the Dormition Cathedral of the Moscow Kremlin is a feast of faith, a feast of joy, a feast of love. We feel the presence of Saint Innocent, Metropolitan of Moscow, and Saint Tikhon, Patriarch of Moscow. Above all, we thank God for His abundant love and mercy.

May the grace of Our Lord Jesus Christ, the love of God the Father, and the communion of the Holy Spirit be with us all.