Source: OCA
Natalya Mihailova | 23 February 2016
At the invitation of His Eminence, Archbishop Leo of Karelia and All Finland, His Beatitude, Metropolitan Tikhon, began an official visit to the Church of Finland on Monday, February 22, 2016. 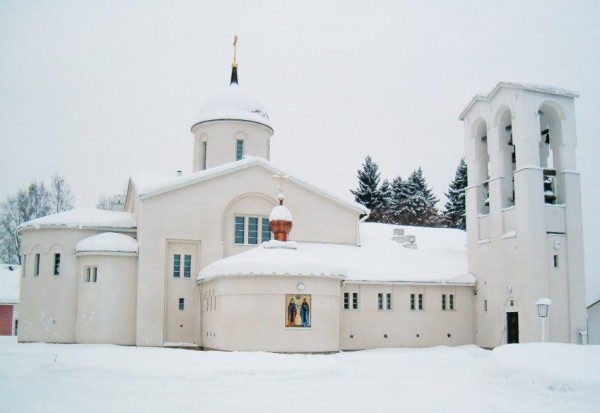 Upon their arrival in Helsinki, Metropolitan Tikhon and the delegation were taken to the Sofia Cultural Center, where they met with His Eminence, Metropolitan Ambrosius of Helsinki.

During their visit, the delegation will participate in two major events.

After the Hierarchical Divine Liturgy, which Metropolitan Tikhon and Archbishop Leo will concelebrate at the New Valaam Monastery on Sunday, February 28, Metropolitan Tikhon will deliver an address on “The Development of Monastic Vocations” at the opening session of the Finnish Church’s annual clergy conference.  The following day, Father John Jillions will offer a presentation to the Finnish clergy on pastoral challenges as experienced by the OCA today.

Metropolitan Tikhon and the delegation also will participate in a one-day seminar in Haaparanta, Sweden highlighting the current refugee situation.  The timely seminar, in which representatives of the Orthodox and Lutheran Churches in Russia and Finland will participate, is being sponsored by the Barents Council of Churches.  In a related event, Metropolitan Tikhon and the delegation will be briefed on the current refugee situation in Europe and Finland by General Major Ilkka Laitinen, Deputy Chief, and Brigadier General Pasi Kostamovaara, Chief of Division of the Border and Coast Guard Division.

In addition to their visit to New Valaam, Metropolitan Tikhon will celebrate the Divine Liturgy at the women’s Lintula Monastery of the Holy Trinity, where he and the OCA delegation will be welcomed by Abbess Mikaela and the sisterhood.  Liturgical celebrations and a presentation on the life of the OCA also will be held at Oulu’s Holy Trinity Cathedral, where the delegation will be hosted by His Eminence, Metropolitan Elia, a graduate of Saint Vladimir’s Seminary.  See related story.

In Joensuu, the delegation will be welcomed at the Theological Department at the University of Eastern Finland by Prof. Matti Kotiranta, Department Head, and other university representatives and seminarians and at the city’s Saint Nicholas Church, while in Kuopio they will visit the Archdiocesan headquarters, the Church Museum and Saint Nicholas Cathedral.  Other planned visits include meetings with Lutheran Archbishop Kari Mäkinen and the Dean of the Lutheran Diocese of Oulu; with Anita Lehikoinen, Permanent Secretary in the Ministry of Education and Culture, and Riitta Kaivosoja, Director General of the Ministry’s Department for Art and Cultural Policy; and with representatives of the Finnish Ecumenical Council.

The Orthodox Church of Finland is an autonomous Church within the jurisdiction of the Patriarchate of Constantinople.  According to the Finnish Church’s web site, it was after Finland gained its independence as a consequence of the Russian Revolution that the Orthodox Church acquired the status of a national Church alongside Finland’s Lutheran Church.  In 1921, Saint Patriarch Tikhon of Moscow granted autonomy to the Finnish Church.  In view of the political turmoil in the Soviet Union and the difficulties of maintaining contacts, however, the Orthodox Synod of Finland applied to be accepted under the protection of the Ecumenical Patriarchate of Constantinople.  On July 6, 1923, the Ecumenical Patriarchate issued a Tomos recognizing the Finnish Church as an autonomous archbishopric.  Today, the Finnish Church consists of three dioceses with some 60,000 souls and remains one of two religious bodies legally recognized as a national church in Finland.  For many years, the Finnish Church has enjoyed a close relationship with the Orthodox Church in America, in part due to the fact that Saint Herman and his missionary companions came from the Valaam Monastery in Russian Karelia.  During World War II, the monastery was evacuated, with many monks relocating to Finnish Karelia, where they established the New Valaam Monastery.