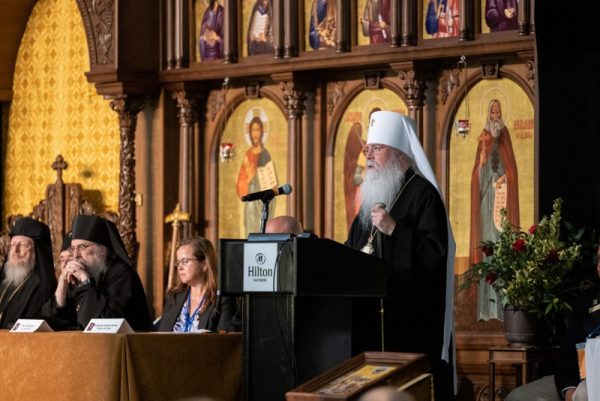 The 20th All American Council of the Orthodox Church in America opened yesterday evening with a Molieban service led by His Beatitude Metropolitan Tikhon. This marks the first assembly hosted by the Archdiocese of Washington since His Beatitude was elected as Metropolitan of All America and Canada in 2012.

The highlight of the evening was Metropolitan Tikhon’s opening address, in which he explained the theme of the assembly, “Becoming Vessels of Grace.” Every member of the Orthodox Church, he explained, has a vocation given God. He then put the idea of personal vocation in context by connecting the recent 50th anniversary of the Orthodox Church with the beginning of the Russian Alaska mission that began in 1794 with the arrival of St. Herman to the New World. He then traced this history back to the origin of Christianity, showing how every member of the Orthodox Church in America is part of a story rooted in the Gospel of Jesus Christ and the work the Apostles.

Metropolitan Tikhon also spoke of the responsibility of Orthodox Christians to serve God. He remarked, “We gather as Christians, as individuals of varied background, culture, and genealogy who yet share one common bond and seal of fellowship: we all bear the Name of Christ.” The faith and tradition of the Church comprise a patrimony that is entrusted to each believer. As stewards of this inheritance, they are responsible for handing it on to the next generation.

Looking to the present and future of the Orthodox Church in America, His Beatitude spoke first about the process of relocation of the Chancery from New York to the Greater Washington D.C. area. The decision to create the Archdiocese of Washington, and to base the See of Metropolitan there, was decided in 1981. With the permanent relocation of the Chancery, the Metropolitan will be able to minister to his Archdiocese more easily. Other concerns that His Beatitude mentioned for consideration are the solvency of the OCA Pension Plan, the issue of clergy physical and mental health, and the stability of the Alaskan and Mexican dioceses.

His Beatitude concluded his address on a hopeful note. “If we set our standards for success in worldly terms—growth in numbers, financial stability, and material prosperity—then perhaps we might find ourselves supposedly failing by those same standards,” He averred. “God’s standards are not numbers and property, but faith, hope, and love.”