Metropolitan Tikhon presides at 80th Anniversary of the “Vatra” 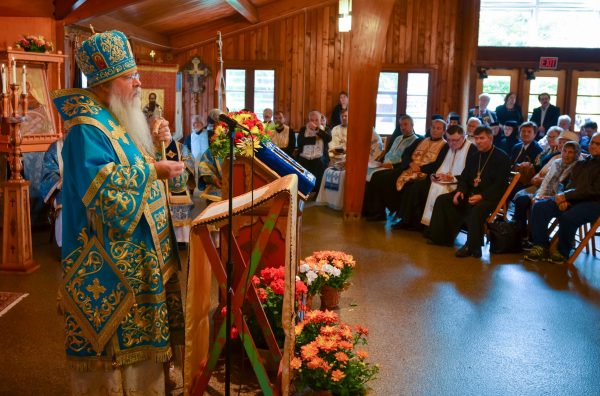 For 80 years, the Vatra Românească—“vatra” means “hearth” in the Romanian

language—has been a gathering point for the faithful of the Orthodox Church in America’s Romanian Episcopate.  The Vatra houses the Episcopate’s administrative headquarters, episcopal residence and museum and is the site of numerous programs, retreats, conferences and summer camps.  The center of life at the Vatra, however, is the Chapel of the Nativity of the Blessed Virgin Mary.

His Beatitude, Metropolitan Tikhon, at the invitation of His Eminence, Archbishop Nathaniel of Detroit and the Romanian Episcopate, presided at the celebration of the 80th Anniversary of the Vatra September 6-8, 2018 in conjunction with the Episcopate’s 86th annual Church Congress.

The history of the Vatra is closely tied to the arrival in 1935 of the first Romanian Orthodox bishop in North America—His Grace, Polycarp [Morusca].  Upon his arrival, he found no designated episcopal residence.  Soon, however, a group of energetic faithful from Detroit facilitated the purchase of Grey Tower Farm in Grass Lake Township, Jackson County, MI.

On July 3-4, 1938, the property—renamed “Vatra Românească “/“The Romanian Hearth”—was dedicated and a cornerstone was laid for the chapel.  Once the ancestral home of the Ottawa and Chippewa Tribes, the site was part of a 1,000 acre holding of the Boland Family, originally from Scotland, who came to the US in 1710 and settled the land on a grant by President Jackson.  From Native Americans to Scotch settlers to Romanian Americans, the land has a rich history, and the “Vatra” remains a well-known local landmark.

Metropolitan Tikhon was warmly welcomed upon his arrival at the Vatra on Thursday, September 6.  The following day, he addressed the Congress’ plenary session.

“We recently concluded the 19th All-American Council with the theme, ‘For the Life of the World,’” Metropolitan Tikhon observed.  “I personally was reinvigorated every day of the Council and encouraged by the lively discussions that took place in the forums and in my one-on-one interactions with the delegates.  It was all inspiring and, in a very concrete way, life-giving.

“I was also encouraged by the positive response to the document I had prepared, Of What Life Do We Speak?,” Metropolitan Tikhon continued.  “The subtitle to that work is ‘Four Pillars for the Fulfillment of the Apostolic Work of the Church,’ and it was clear to me, especially from the inspiring testimonies offered by each of our dioceses in their video presentations, that this apostolic work is, in fact, already firmly established in our parishes and dioceses….  It is clear to me that we are a Church not only prepared to take up our apostolic work with a renewed zeal, but that in every corner of the Orthodox Church in America that zeal has been encouraged, nurtured and already in bloom.”

Later the same day, the Hawaiian Myrrh Streaming Icon of the Iveron Mother of God arrived at the Vatra, where it remained throughout the anniversary celebration and the services marking the chapel’s patronal feast, the Nativity of the Mother of God, on Friday evening and Saturday morning.

On Saturday, September 8, Metropolitan Tikhon concelebrated the festal Divine Liturgy with Archbishop Nathaniel and His Eminence, Archbishop Michael of New York and New Jersey and His Eminence, Archbishop Benjamin of San Francisco and the West.  At the conclusion of the Divine Liturgy, Metropolitan Tikhon awarded the Order of Saint Innocent, Gold Class, to Archbishop Nathaniel “in celebration of over 50 years of ordained service to Jesus Christ, 38 years of episcopal ministry and 34 years as ruling bishop of the Romanian Orthodox Episcopate of America; and in grateful recognition of his tireless ministry as chief shepherd for his flock, zealous proponent of Orthodox unity in North America, and faithful preacher of the resurrection to the world.”  Metropolitan Tikhon also delivered a stirring homily, the text of which may be found below.

Homily of His Beatitude, Metropolitan Tikhon on the
Great Feast of the Nativity of the Theotokos and the 80th Anniversary of Vatra Românească
86th Annual Romanian Episcopate Church Congress
September 8, 2018

My dear brothers and sisters and Christ,

Today, we embark together on the journey of the Church’s liturgical year with the celebration of this first great feast of the Nativity of the Mother of God.  It is a journey that will bring us around to the last great feast of the liturgical year, her Holy Dormition.  Chronologically, then, we move from birth to death, following the example of the Theotokos.  But theologically, and spiritually, we move from death to life, from barrenness to the outpouring of life.

By Your Nativity, O Most Pure Virgin,
Joachim and Anna are freed from barrenness;
Adam and Eve, from the corruption of death.
And we, your people, freed from the guilt of sin, celebrate and sing to you:
The barren woman gives birth to the Theotokos, the nourisher of our life!

These are the words of the kontakion—words which do not weigh us down with the obstacles of barrenness, sin and death, but rather offer us hope that, just as a barren woman can give birth to the Theotokos, so the Mother of God herself can become the nourisher of our life.

In today’s Gospel we have the Lord’s own words about what makes his mother, as Father Thomas Hopko used to say, not the great exception but the great example.  She is holy, as we can be holy, not because she gave birth to Jesus and nursed Him, but because she does so as one who “hears the word of God and keeps it.”

But today I would like to consider especially the world we inhabit, or rather the universe we inhabit, and to which we are called to bring the Gospel.

“Your nativity, O Virgin, has proclaimed joy to the whole universe.”  These opening words of the troparion for this feast seem so out of touch with the realities we are facing as Orthodox Christians, at least in North America, where we are a tiny minority.  All of us here, to one degree or another, and at different stages of our vocations, are engaged in apostolic ministry.  And apostolic ministry at its heart is encapsulated here in this feast, “proclaiming joy to the whole universe.”

The universe is a vast space. As Psalm Eight says, “When I look at Your heavens, the work of Your fingers, the moon and the stars which You have established, what is man that You are mindful of him, and the son of man that You care for him…?”  The vastness of the universe is magnified a thousand times when we consider the tiny reality we are as Orthodox Christians, called to be the mission in North America.  How does one “proclaim joy to the whole universe?”  How many people in Grass Lake, let alone the rest of America and the rest of planet earth, know we are here on a Saturday morning celebrating and proclaiming this joy?  How many know that the miracle-working icon of the Iveron Mother of God is blessing us today with her presence and her life-giving fragrance?  The universe would appear to little notice what we do here.

The scriptures and the Orthodox Tradition refuse to reduce the vastness and the mystery.  They keep a fine balance, moving between the unimaginable expanse of God’s universe and the little things of daily life and traditions that shape our lives in a manner well-pleasing to God.  And just as there is infinitely more in the unseen universe than in the seen, so God is at work and the universe rejoices far beyond what human beings can imagine.

How do we offer such work that is well-pleasing to God?  We should follow the example of the humility of the Mother of God, who provides us with a model, not only of great holiness, but also of Apostolic labors.  She may not have left us with as many words as the Evangelists and Apostles and Fathers, but she offers her life of prayer and service, united in one humble human being.

One of the Desert Father said, “If you have words, but no work, you are like a tree with leaves but no fruit.  But just as a tree bearing fruit is also leafy, a person who has good works comes up with good words.”

At this time, Metropolitan Tikhon presented the Order of Saint Innocent to Archbishop Nathaniel, the Senior Bishop on the Holy Synod of Bishops of the Orthodox Church in America, on the occasion of the 50th Anniversary of his ordination.