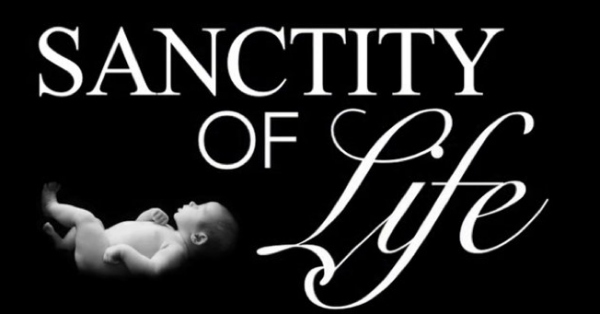 Sunday, January 20, 2019 will be observed as “Sanctity of Life Sunday” in parishes across the United States.  The commemoration marks the 46th anniversary of the Roe v. Wade decision that legalized abortion in the US.

As reported earlier, Metropolitan Tikhon will be among the OCA hierarchs, clergy, seminarians and faithful who will participate in the annual March for Life in Washington, DC on Friday, January 18.  Orthodox Christian marchers are asked to assemble under the “Orthodox Christians for Life” banner at the southeast corner of Madison and 14th Street for the pre-March program.  Metropolitan Tikhon will celebrate a Service of Prayer immediately before the March begins noon.

For forty-six years, we have lamented the Roe v. Wade decision that legalized abortion in the United States of America. And for forty-six years, those who consider life to be a sacred gift from God have gathered each January in Washington, DC and elsewhere in this nation to proclaim this most sacred gift. Created as we are in the very image and likeness of God, we turn to the One Whom we worship as the “Giver of Life” in thanksgiving for sharing His very life with “every man who comes into the world,” even “from his mother’s womb.”

In our liturgical worship, we continuously acknowledge God as the “Bestower of Life.” And in doing so, we recognize that His precious gift is imparted at the moment of conception—a reality underscored in Luke 1:41, in which we read that John the Baptist “leaped” in his mother Elizabeth’s womb, rejoicing in her encounter with the Mother of God. It has become increasingly evident, however, that proclaiming the sanctity of life involves much more than lamenting the legalization of abortion and protecting the unborn, crucial as these are.

While we so often speak of life “in the womb” and eternal life “beyond the tomb,” there are many related issues that are encountered “in between.” Our commitment to life of necessity extends to care for our infants, our infirm, our elderly—and ourselves. While expressing our concern and offering our prayers for the unborn, we are called to recognize that issues such as the opioid crisis, the cost of quality health care, capital punishment, the marked increase in addictions and suicide, to name but a few, are intimately connected to our recognition and proclamation of God’s gift of life.

Our Christian witness demands not only concern for the unborn, but a sense of responsibility to ensure that living a “life well lived”—seeking the blessedness to which we have been called—extends to the unborn and born alike. As we discern the will of God in our own lives, we are called to preserve and protect all life in recognition of God’s plan for His people on this earth and in anticipation of “the life of the world to come.”

As we mark this sorrowful anniversary, may we turn our attention to the “Giver of Life,” Who created us in His ever-abundant love. May we, each in our own way, proclaim His sacred gift. And may we embrace His will, that in all things He and He alone might be glorified as the “Fountain of Life” and the “Light of the world,” Who brings all mankind to that Kingdom which has yet to be fully revealed, but is already fully present in the life of His people, the Church.