January 19 is “Sanctity of Life Sunday” 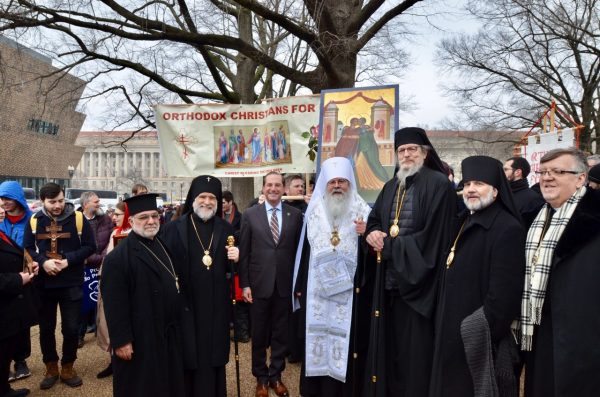 The day serves as a prelude to the annual March for Life marking the 48th Anniversary of the Roe v. Wade decision that legalized abortion in the United States, in the US Capital on Friday, January 24. As in past years, Orthodox Christians from across the country will gather to proclaim the sanctity of God’s precious gift of life and to remember the millions of victims abortion has claimed over the past four decades.

His Beatitude Metropolitan Tikhon will lead a delegation of bishops, clergy, monastics, seminarians and faithful from the Orthodox Church in America as they join other Orthodox Christian bishops, clergy, and faithful participating in the annual March for Life. Among the other members of the Orthodox Church in America’s Holy Synod of Bishops expected to participate are His Eminence Archbishop Melchisedek of Pittsburgh, His Eminence Archbishop Michael of New York, His Grace Bishop Paul of Chicago, and His Grace Bishop Daniel of Santa Rosa.

Events on Friday, January 24 will begin with the Divine Liturgy at 8:30 am at Saint Nicholas Cathedral celebrated by His Grace Bishop Daniel of Santa Rosa. Following the celebration of the Divine Liturgy marchers will make their way to the National Mall for the pre-March rally and March. The pre-March rally will begin at noon at 12th St. on the National Mall. Among those scheduled to address the rally will be His Grace Bishop Apostolos of Medeia, of the Greek Orthodox Archdiocese of America, who will offer a prayer on behalf of the Assembly of Bishops.

At the conclusion of the rally, Metropolitan Tikhon will preside at a prayer service for those who have fallen victim to abortion. The exact location of the prayer service is yet to be determined but will be announced here, on the social media outlets of the Orthodox Church in America, and at the Orthodox March for Life Facebook page. Those planning to participate are asked to text “MARCHFORLIFE” to 844-334-5548 to receive text messages for day-of updates.