The text of the letter appears below.

By way of background, the Holy Synod of the Ukrainian Orthodox Church held an extraordinary meeting at the Monastery of the Caves in Kyiv on February 24, 2014. In accordance with the Charter of the Ukrainian Orthodox Church, His Eminence, Metropolitan Agafangel of Odessa and Izmail, the most senior permanent member of the Synod, chaired the meeting. 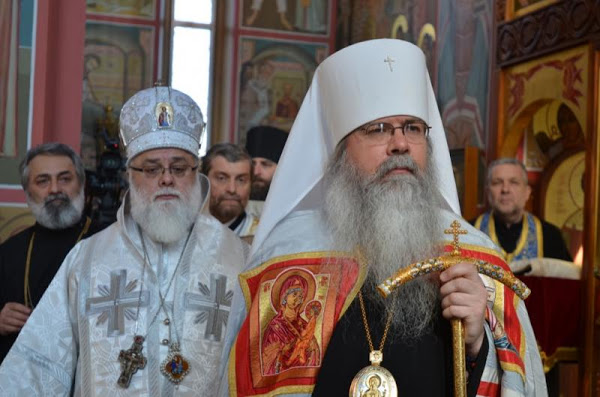 The Most Reverend Onufry
Metropolitan of Chernovtsi and Bucovina
Locum Tenens of the Kyiv Metropolitan See
Str. Lavra 15, b. 49
01015, Kyiv UKRAINE

Your Eminence, Beloved Brother in Christ:

We continue to offer prayers for His Beatitude Metropolitan Volodymyr, our beloved brother and concelebrant, and we stand by him with love at this painful time of his life and earthly pilgrimage.

In the Orthodox Church in America we have prayed during the past weeks for the peace of Ukraine and its people and for the faithful ministry of the Ukrainian Orthodox Church in the midst of social and political turbulence and human tragedy.

May God grant Your Eminence, and under Your leadership the whole Ukrainian Orthodox Church, the strength and wisdom to be a steadfast witnesses to social and ecclesial peace. In this way You will make an important contribution to the quest of the Ukrainian people for a humane life on the basis of mutual respect.

Asking for Your prayers, I assure You of the prayers of the bishops, clergy, monastics, and laity of the Orthodox Church in America.