Source: OCA
Natalya Mihailova | 07 August 2015
His Beatitude, Metropolitan Tikhon will join His Grace, Bishop David of Sitka and Alaska; His Grace, Bishop Daniel of Santa Rosa; and clergy and faithful from near and far at the 45th annual Saint Herman Pilgrimage to Kodiak and Spruce Island August 7-9, 2015. 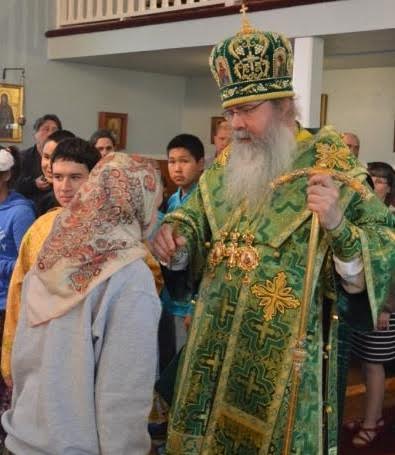 The pilgrimage, which coincides with the anniversary of the 1970 Glorification of Saint Herman of Alaska, opens tonight, August 7, with the chanting of the Akathistos Hymn in honor of Saint Herman at Kodiak’s Holy Resurrection Cathedral.  A tea and tours of the Archives of Saint Herman’s Seminary will follow.

On Saturday morning, August 8, pilgrims will depart by boat from Oscar’s Dock to Monk’s Lagoon on Spruce Island, where Metropolitan Tikhon will preside at the Hierarchal Divine Liturgy at Saints Sergius and Herman of Valaam Chapel.  The chapel marks the original grave of Saint Herman, whose relics now are enshrined in Holy Resurrection Cathedral.  Pilgrims will enjoy a picnic lunch before returning to Kodiak, where Great Vespers will be celebrated at the cathedral.

The Feast of Saint Herman will be celebrated on Sunday, August 9, with the Hierarchal Divine Liturgy at Holy Resurrection Cathedral, followed by a grand banquet and introduction of pilgrims at the Afognak Native Corporation hall.

Additional information may be found on the web site of the Diocese of Alaska.