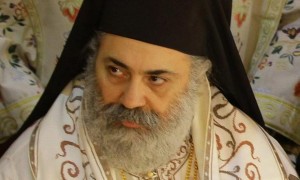 Beirut/Moscow, April 24, Interfax – Militants of the Jabhat al-Nusra movement were the ones to kidnap two bishops in Syria, the bishops’ friend and Syrian human rights activist Wail Malas said in an interview with the Voice of Russia radio station.

“Most likely, with this step, the kidnappers want to stir a conflict between various denominations in Syria. It has already become known who kidnapped the metropolitans. It is a group of terrorists of Chechen origin, called Jabhat al-Nusra, also known as The Detachment of Khayr-ad-Din Az-Zarkali,” the Voice of Russia quoted Malas as saying.

The radio station reported that contradictory reports were coming from Syria on the destiny of the two priests kidnapped by militants on Monday – Orthodox Metropolitan Pavel Yazici of Aleppo and Metropolitan Yohanna Ibrahim of the Siro-Jacobite Church. According to the information of foreign news agencies, the Aleppo Diocese officials deny the previously received information that the two metropolitans have been released.

The Syrian human rights activist said that terrorists kidnapped and killed not only Christians but everyone who advocated for peace, including Islamist preachers, who were opposed to the war and bloodshed.

“They call these preachers betrayers. For example, on March 21, well-known Sunni sheikh Ramadan Al-Bouti was killed as a result of an explosion in a mosque in Damascus. Besides the sheikh, this explosion also killed more than 40 people. Most likely, the sheikh was killed because in his sermons, he called for peace and tolerance,” Malas said.

Malas said that if the opposition won, Christians in Syria were facing the same fate as Christians in Iraq – they will either flee the country or will be killed.

“At present, about 400,000 Christians have already fled from Syria because they didn’t feel safe in the country. It is the terrorists’ aim to totally free Syria from Christians, and they won’t stop at killing anyone who tries to resist them. For example, the region of Wadi al-Nasara in Syria is populated mainly by Christians. Practically every day, these Christians receive letters from the Syrian opposition with threats that all of them will be killed,” Malas said.