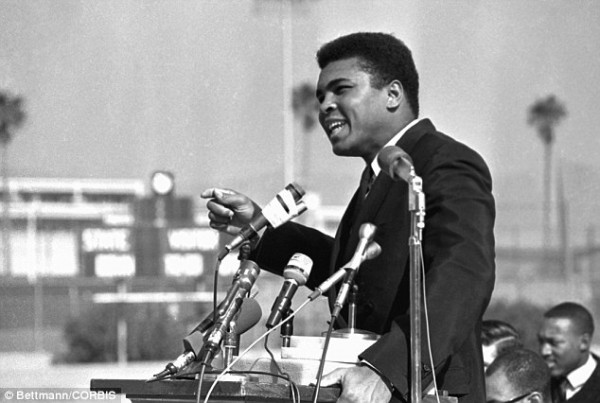 Muhammad Ali, the former Cassius Clay, was a controversial figure during most of his young life, but he ended up dying as a beloved person. His transition was quite interesting, and has been studied more than once. A braggart who could back up his words with fists of steel. But, he ended up being more than that. In his Supreme Court case, he showed that he was willing to stand up for his beliefs even to the point of being stripped of his title and insulted for not being a patriot and going over to kill people at the government’s command. I phrase it that way because the Supreme Court ended up siding with him. He showed that one need not be a pacifist to successfully use religious beliefs to object to participation in an unjust war. More than that, he was successful in showing that freedom of religion means that the government cannot order you to do certain things. Those who have agreed with the Sisters of Charity in their case against the Affordable Care Act owe a bit of a debt to Muhammad Ali. He also showed that being against a particular war did not mean that you were somehow soft.

He became a Muslim in 1965 and changed his name. But, that change is also a bit of a challenge to Christians. On one Facebook page, someone mentioned that his desertion of Christianity made him an apostate. But, if you look back at 1965, it was during a time when there was upheaval going on in the country and many African-Americans began to turn to Islam as a rejection of a society that they saw as Christian and oppressive. You have to remember that this was the era of the Civil Rights Act. Within three years of his becoming Muslim, James Meredith was shot, Martin Luther King was murdered, and Robert Kennedy was murdered. Within three years, President Johnson refused to run for a second term, stating that if nominated he would not run and if elected he would not serve.

We need to remember that it was during this era, when segregation was still being fought as was the Civil Rights Acts, that many Christians preachers were fighting changing the laws against miscegenation. It was only two years earlier that Martin Luther King had had to write the Letter from a Birmingham Jail to his fellow pastors to defend that Christian pastors should be on the side of justice. “You deplore the demonstrations taking place in Birmingham. But your statement, I am sorry to say, fails to express a similar concern for the conditions that brought about the demonstrations. I am sure that none of you would want to rest content with the superficial kind of social analysis that deals merely with effects and does not grapple with underlying causes. It is unfortunate that demonstrations are taking place in Birmingham, but it is even more unfortunate that the city’s white power structure left the Negro community with no alternative.” That white power structure included the preachers to whom he was writing. The rise of the Islam among African-Americans was, in large part, a rejection of what they saw as Christian values that tolerated injustice. The amazing part was that Ali managed to avoid the sectarian, supremacist bent of the Nation of Islam and instead became something else, a humanitarian in the best sense of the word.

I would even argue that some of the preachers from that era that stood for all that was wrong with the laws and attitudes of that time are more apostate than Muhammad Ali ever was. Sadly, today we see a resurgence of that type of thinking. Using code words, insisting that the President could not possibly be a Christian, using 6 degrees of relationship arguments to show that the President is supposedly in league with radicals, etc., the same type of dialogue that Ali opposed has returned to the national stage. But, we do not seem to have people of the stature of a King or an Ali or an Archbishop Iakovos to publically march in support of what is right. We also do not seem to have people of the stature of a William F. Buckley (except maybe George Will) or a Milton Friedman to write erudite conservative critiques that are not linked to racism or sexism. Rather, we seems to have but pale shadows of the great men and women of yore who argue subjects that they know not and parrot phrases they do not understand. Ali may not go down as one of those greats, but his battle against the anti-patriotic hawks of the Viet Nam War is certainly one of the great moments of judicial history. Hopefully those who are now challenging the government in the courts on religious grounds will recognize the debt they owe him.