Mongolia Celebrates the 150th Anniversary of Its First Orthodox Service

Source: Pravmir.ru
The first Liturgy was performed at the Holy Trinity Church in the Russian consulate.
Natalya Mihailova | 06 April 2014
April 4, 2014. PRAVMIR. At the central post office in Ulan Bator, a ceremony introducing collectible envelopes marking the 150th anniversary of the first Orthodox service in Mongolia was held. 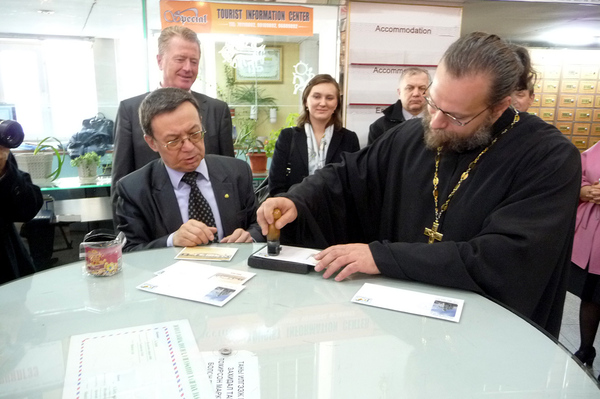 The first Divine Liturgy was served on April 3, 1864, at the Holy Trinity Church in the building of the Russian consulate in Urga (the old name of Ulan Bator), headed by Fr. John Nikolsky a priest from the Transbaikal. This day is also considered the birthday of the Holy Trinity parish of the Russian Orthodox Church in Mongolia, the press service of the Department for External Church Relations noted.

The parish was closed during the Soviet regime. Church life was restored in the 1990s. In the summer of 2001, Metropolitan Kirill of Smolensk and Kaliningrad (now Patriarch of Moscow and All Russia) laid the foundation stone for the new Holy Trinity Church, the construction and consecration of which took place in 2009.

Celebrations at the central post office were organized by initiative of the Holy Trinity parish in Ulan Bator and the Russian Embassy in Mongolia. It was attended by the embassy’s staff, the heads of Rossotrudnichestvo (Federal Agency for the Commonwealth of Independent States) in Ulan Bator, Orthodox parishioners, the staff of the Mongolian central post office, as well as Mongolian media representatives. The rector of the parish is Fr. Alexey (Trubach).