Monument to New Martyr Valeriu Gafencu Blessed in His Hometown 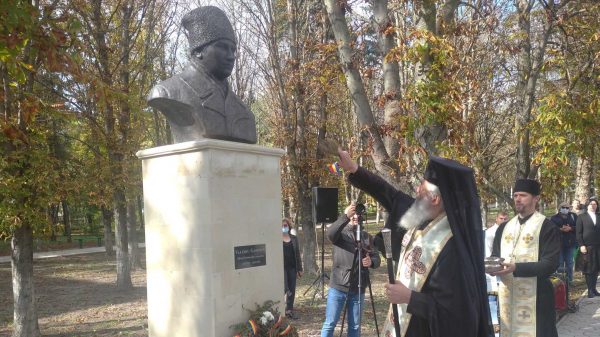 Photography courtesy of the Bălți Diocese

On Thursday, October 1, a bust of Valeriu Gafencu, one of the most beloved 20th-century martyrs of the Romanian Orthodox Church, was unveiled and blessed in his hometown.

Gafencu was arrested by the communist authorities in 1941 and died 11 years later at Târgu Ocna Prison at the tender age of 31. He was dubbed “Saint of the Prisons” by theologian Nicolae Steinhardt for his “exemplary Christian conduct and devotion to those in suffering.”

The monument in his honour was installed in front of the House of Culture in the city of Sîngerei, now located in the Republic of Moldova.

The bust was blessed by His Grace Bishop Antonie of Bălți, who expressed hope that the memorial will inspire the youth of Sîngerei to discover the beauty of the Orthodox faith, as Valeriu Gafencu did.

The event was attended by local authorities and members of the Romanian Parliament.

He was a confessor of the Orthodox faith, nicknamed by Nicolae Steinhardt, “The Saint of Prisons.”

He was the son of Vasile Gafencu, a Romanian politician, a deputy in the Country Council from the Executive Committee of the Council of Moldovan Officers and Soldiers of Odessa who on March 27, 1918, voted for the Union of Bessarabia with Romania.

Vasile Gafencu was deported to Siberia by the Soviet occupation forces in the autumn of 1940.