ROCOR Metropolitan: “The New Martyrs Show Us How to Live Under Persecution” 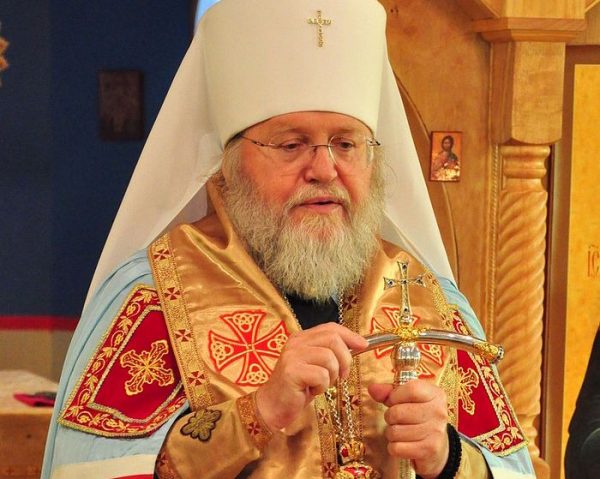 Metropolitan Hilarion (Kapral), the First Hierarch of the Russian Church Outside of Russia (ROCOR)

His Eminence Metropolitan Hilarion of Eastern America and New York, First Hierarch of the Russian Orthodox Church Outside of Russia, discussed the actions of Constantinople, Church schisms, enduring persecution and ties with Ukraine, and answered questions on what can unite believers today, what challenges mankind faces, and other questions.

– Vladyka, how are the actions of the Constantinople Patriarch in receiving schismatics and claiming power over the whole Church viewed from abroad?

– We are very sad and bewildered as we observe the actions of the Patriarchate of Constantinople, in which we sense the influence of the powers that be in this world, and a dismissive attitude towards the truth of Orthodox Christianity in the land of Ukraine, which is holy for us. Astonishing, too, is the complete absence of a pastoral approach to the Ukrainian Orthodox Church headed by His Beatitude Metropolitan Onouphry of Kiev and All Ukraine.

For by “legalizing” schismatics and trying in every way to obtain their recognition by the Local Orthodox Churches, Patriarch Bartholomew in fact expels not only the overwhelming majority of our brother archpastors, clergy, monastics and laypersons of Ukraine who are dedicated to the Holy Church, but all of us as well. It is unclear why Patriarch Bartholomew and his Holy Synod hastened to make such a rash decision, without the counsel of the Russian Orthodox Church and other Local Orthodox Churches. The decision to rescind a three-hundred-year-old document, and efforts to justify their intrusion into the territory of the Ukrainian Orthodox Church appear at minimum clumsy and irresponsible.

Still, we try to pray for them and those around them, that the Lord may grant them wisdom, illuminate and have mercy upon them, even as we beseech Heavenly aid to His Beatitude Metropolitan Onouphry and the entire Ukrainian Orthodox Church, the sole canonical Church of Christ on the Ukrainian territory.

– Persecutions of the Church in the Ukrainian land in one form or another have not ceased since the times of the 1917 revolution. In that context, how important for us is the memory of the New Martyrs as examples of firmness in the most difficult of circumstances?

– Of course, the example shown by our New Martyrs and Confessors shows how to live under persecution. When a person deeply believes in God and trusts in His guidance with all his heart, he learns patience, humility and the calm endurance of troubles, and by the way these virtues are then emulated by those around him. Such a person will always act according to the Gospel. Let us remember the martyrdom of Metropolitan Vladimir (Bogoyavlensky) of Kiev and Galicia, praying for the forgiveness of his executioners and blessing them before being shot. A distant relative of St Vladimir, Metropolitan Anastassy (Gribanovsky) of blessed memory, second Primate of the Russian Church Abroad, called him “the leader of the Divine regiment” of new passion-bearers and confessors of Christ. Imagine the edifying blessing the clergy and flock of the time received when they learned of the example of New Hieromartyr Vladimir and his calm, prayerful attitude to the persecution and persecutors! We should also remember St Tikhon (Belavin), the Patriarch-Confessor, who, as His Beatitude Metropolitan Onouphry today, was rejected by the Constantinople Patriarchate. St Tikhon accepted the brutality of that period of persecution as having been allowed by God, remembering the words of the Psalm-writer: “Be of good courage, and he shall strengthen thine heart: wait, I say, on the LORD.” Therefore, the most difficult thing for us now is also the most important: to follow their example and firmly stand in the faith, humbly and thankfully receive Divine Providence, knowing that He leads us to eternal life, fervently praying for both the persecuted and the persecutors. We should hope that such prayer and such behavior will evoke the mercy of God.

– You were tonsured to the rassa with the name Hilarion in honor of St Hilarion, Schemamonk of Pechersk. Do you sense a special bond to the Kievan land?

– Without a doubt! In my cell I have an icon of my heavenly patron, St Hilarion, Schemamonk of Pechersk, with a portion of his holy relics. This icon is brought out to the middle of the Synodal Cathedral of Our Lady “of the Sign” in New York for veneration by the faithful on his feast day. When I visit Kievo-Perchesk Lavra, I always hurry to his crypt and pray for his aid. Naturally, I have special trepidation for the Kievo-Pechersk, Pochaev and Svyatogorsk Lavras, and to other holy sites in Ukraine. My relatives live in the country, whom I try to visit and with whom I stay in contact.

This special relationship with the land of Kiev is helped by the fraternal bonds between our Russian Church Abroad and the Ukrainian Orthodox Church. Firstly, St John (Maximovich) of Shanghai and San Francisco the Miracle-worker was born in the town of Adamovka 125 years ago, he lived and studied in Kharkov, where he met the future Metropolitan Anthony (Khrapovitsky) of blessed memory, who headed the Russian Church Abroad in 1920. Secondly, it is known that Metropolitan Anthony served at the Kievan Metropolitan cathedra after the murder of Metropolitan Vladimir. Speaking of St Vladimir, one cannot help but remember the head of the printshop in Pochaev, Archimandrite Vitaly (Maximenko), who died as an archbishop abroad. It was he who reestablished the Pochaev publishing concern abroad and set up a safe haven for it at Holy Trinity Monastery in Jordanville, NY. Vladyka Vitaly could not recount the last Akathist to the Dormition of the Mother of God performed by Metropolitan Vladimir in Pechersk Lavra without tears in his eyes. Then-Archimandrite Vitaly joined the Metropolitan in performing the akathist and was very touched by the manner of how the archpastor prayed on the last days of his earthly life. This is reflected in the ninth song of the canon in the service to the New Martyrs composed by the Russian Church Abroad in 1981 by Archbishop Anthony (Medvedev), the spiritual son of Vladyka Vitaly, in which St Vladimir is mentioned as reading the akathist.

Archimandrite Dimitry (Byakai) and Archimandrite Nektary (Chernobyl), serving in our Mission in the Holy Land, and Archimandrite Gelasy (Maiboroda), who died a cleric of the Synodal Cathedral of Our Lady “of the Sign” in New York, as well as many other active members of the Russian diaspora, were by background from Kievan Rus and personal knew many martyrs and confessors. I had the joy of knowing these and other ascetics who held aloft the banner of Holy Russia in the diaspora, fondly remembering their homeland, her martyrs and other saints.

But it is not only the past that evokes in us special reverence for Ukraine. The present monastic, hierarchal and confessional feats of His Beatitude Metropolitan Onouphry evoke love and respect for him and the Ukrainian Orthodox Church he heads, a true heir of the Church which, baptized in the font of the Dniepr River, received the Orthodox Faith from our fathers.

– What can unite believers today?

– During Great Lent, the faithful are united by the universal feat of repentance of the whole Church, which each member carries out to the extent of his ability and opportunity, and afterwards, the Paschal joy of the Resurrected Christ. We are called upon to live in this joy. That is why Pascha is called “The Feast of feasts and celebration of celebrations,” always held above the Twelve Feasts. In general, the Holy Fathers write that the most ideal state of the human soul is the unity of the effort of Great Lent and the endearing joy of the luminous night of the Pascha of Christ. So it seems to me that if everyone tries to “serve the Lord with fear,” together and patiently bearing our common cross of witness, and together “rejoice in Him with trepidation,” “rejoicing Divinely, for Christ is Risen,” then this will firmly unite us and strengthen us. May this be so!

– In my view, the most difficult challenge of our time is the universal secularization of society, which pulls people away from the saving embrace of the Church of Christ. Some easily accept this, obtaining various pleasures from their tepid nature, others try to fight it through the active striving towards God, preaching the Gospel not so much by word but by their very way of life. The latter inspire others and preserve them within Holy Orthodoxy.

– Who among the saints is for you an example to emulate?

– As a hierarch residing–and serving to the best of my ability–in the complicated conditions abroad, I would say that St John (Maximovich) successfully fought the secularization of society that was beginning then, combining within himself various holy qualities: those of prophecy, Apostolic service, hierarchal, martyric, monastic and the trait of poverty. He knew perfectly well the lives of the saints, remembering details of their lives, not only of the famous ascetics, and tried to emulate them. It is specifically how, performing in his life the prophetic, Apostolic and other saintly works, he was able, with God’s help, to attract, console, edify and unite a great multitude of believers, who after 55 years since his repose (1966), continue to piously venerate his memory. It is he whom we should imitate in our difficult times.

– What would you wish for the believers of the Ukrainian Orthodox Church?

– With a warm heart and brotherly love I wish for them to overcome all crises, which will elevate them spiritually, renew the powers of the People of God and open the eyes of others to Divine Truth!