Source: Pravmir.ru
Natalya Mihailova | 25 November 2014
November 24, 2014. A festive ceremony of switching on the lights of the largest Christmas tree of France, which the Moscow administration had presented Parisians with, took place on Saturday, November 22. The tree was installed before the main facade of the Notre Dame Cathedral Paris (“Our Lady of Paris” in French) 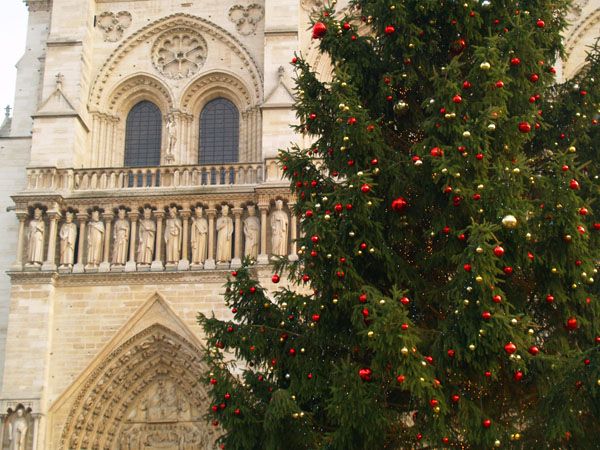 The Sedmitsa.ru website has reported that the symbolic button, which switched on the illuminations, was pressed by Cardinal Andre Vingt-Trois, Archbishop of Paris; Monseigneur Archpriest Patrick Jacquin, Rector of the Notre Dame Cathedral Paris; Alexander Orlov, the Ambassador of the Russian Federation in France; and Igor Tkach, the representative of the Moscow administration.

A large Christmas tree on the premises of the Notre Dame de Paris has always been installed during the Advent period thanks to the local parish. Due to some difficulties in gathering money this year, the Russian side decided to help the congregation of the cathedral and presented Parisians with a pine tree for Christmas.

The initiative, which appeared during a talk between the Russian ambassador and the Paris archbishop at the beginning of November, has been fulfilled at a record pace.

“The Moscow administration has given a blank check fast. The Russian Orthodox Church also supported the idea. So three weeks later this beautiful pine tree arrived in Paris with best wishes to all Parisians from the Mayor of Moscow and the Moscow administration. This is a wonderful symbol of unity, fraternity, and mutual understanding between Christian peoples. We would like people to not associate this present with politics,” Mr. Tkach noted.