Source: Guardian News
Remains have been in state archives for nearly a decade, since being discovered by a builder more than 40 miles away from the burial site of their family.
Natalya Mihailova | 11 July 2015 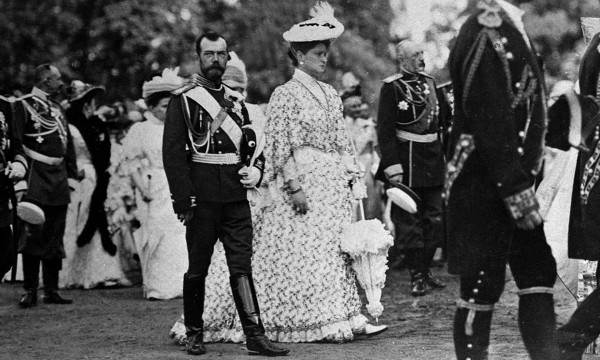 Bodies belived to be those of Alexei, 13, and Maria, 19, two of the children of Nicholas II, tsar of Russia, pictured with his wife, Alexandra. Photograph: Popperfoto/Getty Images

Russia has launched a new drive to confirm the identity of and bury remains thought to be those of the last tsar’s daughter and only son, which have been stored in state archives for nearly a decade.

Remains believed to be those of Nicholas II’s heir, Alexei, who suffered from haemophilia, and his sister Maria, lie unburied in state archives amid doubts over their identity.

In a step towards their final burial, the Russian government ordered the creation of a high-level taskforce on Thursday to work on their identification and burial, led by the head of the government’s administration, Sergei Prikhodko.

The members of the tsar’s family and their servants were shot by the Bolsheviks and thrown into a mineshaft in 1918 before being burned and hastily buried.

“Today, under President Putin, I hope [the burial] will be completed,” the head of Russia’s archive agency, Andrei Artizov, said on Friday.

“The discovered remains of Alexei and Maria must be buried along with their parents,” said the head of Russia’s state archives, Sergei Mironenko.

“Personally, I have no doubt that these are the remains of Alexei and Maria.”

Mironenko called the creation of the working group “a great step forward”.

Russia in 1998 buried remains of other members of the tsar’s family found in 1991 in St Petersburg’s Sts Peter and Paul cathedral.

The remains suspected to be Alexei and Maria were found in 2007, 43 miles away from the others. Alexei was 13 when he was murdered, while Maria was 19.

While Russian criminal investigators have ruled that the remains of Alexei and Maria are authentic after DNA testing, their identity has not been accepted by the Russian Orthodox church, which has canonised the last Romanovs, or by some Romanov descendants.

The church does not recognise any of the remains of the Romanovs as holy relics, and the Patriarch of the Orthodox church did not attend the 1998 burial.

The new working group will include members of religious organisations, the government said.

A senior Orthodox church spokesman, Vsevolod Chaplin, called the working group “timely” and “serious”, but stressed that it must “eliminate all the questions from experts and the public”.

“I hope the working group will help answer all the difficult questions in a spirit of openness and honesty,” said Chaplin.