Source: TASS Russian News Agency
St. Patrick wasn’t the only western saint to be recently added to the list
Natalya Mihailova | 17 March 2017
MOSCOW, March 17. /TASS reporter Alyona Topolyanskaya/. Moscow is turning green for the weekend in honor of St.Patrick’s Day, to mark the 25th anniversary of its annual Moscow parade and the 10th anniversary of the Irish film week. 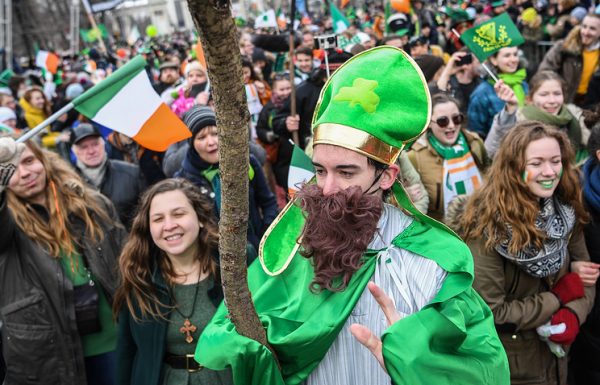 The annual parade that once got its start on Arbat in the early 1990s has since outgrown the busy street and was moved to the Sokolniki Park a few years ago. This year, its organizers are expecting a turnout of close to 15,000 people, if the weather holds up.

Co-founder of the Irish week and Irish Film Festival Gerard Michael MacCarthy says that while there are only several hundred Irish people living in Moscow, the parade is made up of Muscovites. “It’s an excuse to get out, get some fresh air, dress up…festivals are usually something exclusive, but our festival is meant to be completely inclusive,” says MacCarthy. He insists that it is that innocent inclusiveness that draws people to the Irish events. “We are very similar in attitudes, in enjoying life, the outdoors, strong family values,” he added.

This year, says MacCarthy “there is more energy about the events that we are doing,” in fact, the Irish Film Festival that opened on March 15 has already sold two-thirds of last year’s total ticket sales volume. The festival, located at KARO 11 Oktyabr, features 12 films including Sing Street, by director John Carney (Once, 2007) , about a boy that starts a band in Dublin in the 1980s, to impress a girl.

Hugh McEnaney, Charity Coordinator of the Moscow Irish Club says that “between the 10th Film Festival and the 25th anniversary of the parade, it just goes to show that the connection between Russia and Ireland continues to grow despite the sanctions.” According to McEnaney, Irish embassy officials will be on hand at the Saturday parade, as well as members of the Irish football team based in Moscow, Irish folk dancers and various music acts.

In fact, music is the focal point of this year’s celebration. The Green March contemporary Irish music festival is taking place at several Moscow clubs, where Dublin’s Raglans and alternative rock-duo from Derry and Donegal, Waldorf & Cannon, will be absolutely free of charge. ” If you are a fan of Kodaline and Hozier you will be given a unique opportunity to witness new Irish talent live. They are energetic, fearless and are eager to conquer music world and your heart just like their older colleagues did,” the organizers said in a statement.

And for those who can’t get enough – an 8-hour Gala Festival St.Patrick’s Day and Night will take place at Izvestia Hall, and will feature folk bands from both Ireland and Russia. Part of the festivities are an arts and crafts market, Irish cinema and video art on a big screen.

The Irish Club is set to hold its annual Emerald Ball, which is a charity event on March 18, to benefit two Russian organizations one for victims of domestic violence, another for children with formal education trouble.

So as McEnaney puts it, “the Irish don’t do anything by halves, give us a week, we’ll make 10 days out of it,” the Irish week will run until March 26.

There are also more academic ways to celebrate like visit the Moscow State University open roundtable discussion in honor of St. Patrick’s arrival in Ireland, or the foreign languages library (Inostrannka) will hold a lesson titled “A Journey with the Irish Language.”

Father Igor Fomin, rector of the church of the Holy Prince Alexander Nevsky at MGIMO says that “holy justice has been served,” when it comes to St. Patrick, since his work took place before the east and west split of the Church.

“Having always loved him, we can now pray for him officially,” he said, adding that the saints labour was not always duly noticed.

However, the celebration of St. Patrick falls in the middle of Russian Orthodox lent and does not allow for the traditional beer-guzzling, associated with the holiday. Father Igor says that drinking in excess to honor a saint is much like showing up heavily intoxicated at your mother’s gravesite, it happens, but it has nothing to do with the holiday or honoring the deceased.

“I am very happy that our St. Patrick’s day falls on a different date, that way the traditions associated with it, that are strictly cultural and not religious can be ignored.

Yet, Russians enjoy honoring the saint, like many others do around the world, with a pint and a dance. “You can go to bars, you can drink quality draft beer, sometimes, and dance on tables and it’s a day when no one frowns upon that, in fact, it’s welcomed,” says Roman Kanunnikov, digital advertising manager and Irish folk dancer.

St. Patrick wasn’t the only western saint to be recently added, as there were 16 in total including St. Genevieve, the patron saint of Paris; Germain of Paris; and the Czech saint Procopius of Sazava and other saints that lived in the third, fourth and fifth centuries.

The Irish have been celebrating St. Patrick’s Day on March 17 since the 10th century, and at the end of the 17th century, the holiday was officially included into the Catholic church liturgy calendar. Fast forward another three centuries, and St. Patrick’s became an observed holiday in Ireland. The biggest celebrations outside of Ireland take place in the Unites States, where 36 million people, or 12% of the population consider themselves to be of Irish descent. Other countries around the world with big Irish communities are Australia, Argentina, Canada, and New Zealand.