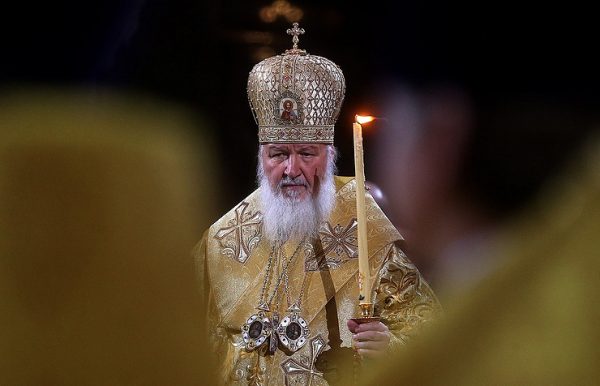 St PETERSBURG, July 12. /TASS/. The Patriarch of Moscow and all Russia, Kirill I leads a festive liturgy on Tuesday in the familial burial vault of the Romanov dynasty in St Peter and Paul’s cathedral in St. Petersburg, a spokesperson for the St Petersburg diocese told TASS.

On July 12, the Russian Orthodox Church marks the Day of the Preeminent Apostles Peter and Paul, who are regarded as heavenly protectors of St Petersburg.

“Kirill I arrives in St Petersburg after a trip to the Valaam (an archipelago on Lake Ladoga where one of the most venerated Russian monasteries is located – TASS),” the spokesperson said.

“A festive liturgy on Peter and Paul’s day is a tradition, as this is one of the most important Christian feasts that marks the end of the Apostles’ fasting,” he said. “It was established to commemorate the delivery of the relics of St Peter and St Paul to Rome in 258.”

July 12 (June 29 under the Julian calendar – TASS) is the Patron Saint’s Day in St Petersburg, as the city was named after St Peter when founded in 1703.

Upon the decree issued by Czar Peter I, the first wooden church in the name of the Apostles was laid down on Zayachy Island on July 12. The stone cathedral that has survived through to our days was built from 1712 to 1733 at the design of the Italian architect Domenico Tresini.

The Russian Church consecrated the cathedral in 1742 and it kept the status of the city’s metropolitan see until 1858 when the status went over to St Isaac’s Cathedral.

No services were held in St Peter and Paul’s Cathedral from 1919 to 2000. In 1922, the edifice turned into a department of the Revolution Museum. Its function changed once again in the 1930’s when it became a storage facility of the Central Chamber of Books.

Since 1954, it is an integral element of the compound of the State Museum of History of the City.

The cathedral is the tallest historic building in St Petersburg, with the spire totaling 122.5 m. It is broadly viewed as an architectural landmark of the city.

During World War II when Leningrad stayed under Nazi siege and was the target of innumerable artillery attacks and air raids, the local climbers carried out an unprecedented operation to disguise the spire, as its gilding served as an orienting point for Luftwaffe pilots.

Domenico Tresini modeled the cathedral on Italian basilicas. Today it is one of the best surviving samples of Petrine Baroque.

Peter I donated a carved gilded iconostasis with 43 icons to the cathedral. He personally compiled its composition – with the assistance of Feofan Prokopovich, the archbishop of Novgorod.

It also has the status of a vault of Russian military glory, since the military kept the captured foreign banners and keys from the cities seized by Russian troops in the 18th and 19th centuries. At the beginning of the 20th century, these exhibits were transferred to the State Hermitage Museum.

Peter I made the cathedral an official burial vault of the Russian Imperial Family where virtually all the Emperors and Empresses who ruled after him are buried.

In 1998, the remains of the last Russian Emperor, Nicholas II, Empress Alexandra, their three daughters and their servants, which investigators had found years earlier near Yekaterinburg in the Urals, were buried there.

The only two Romanovs, whose relics remain unburied today, are Crown Prince Alexis and Princess Maria, as their remains were found in the Urals only in 2007.

Patriarch Kirill I asked the government in the autumn of 2015 do genetic tests of the remains of Nicholas II and his father, Emperor Alexander III. The Russian Church believes that positive results of the tests will offer an undeniable proof of genuineness of the remains.

Experts did the exhumations. In case of proof positive, the remains of Alexis and Maria will also be placed to rest in the cathedral’s Chapel of St Catherine.