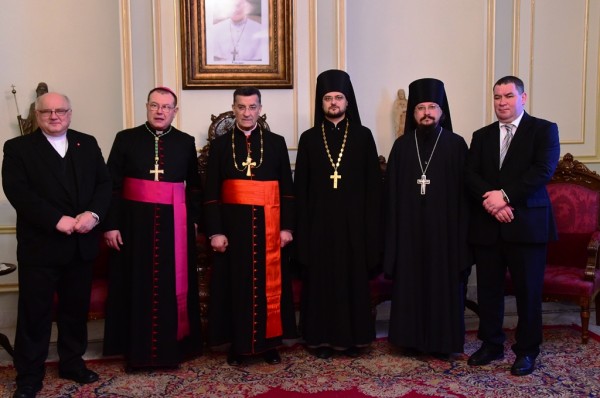 On April 6-7, 2016, the Russian Orthodox Church and the Roman Catholic Church launched activities in Lebanon and Syria to support Christians in distress. As is known, the tragedy in the Middle East, which has affected people of various Christian confessions and other groups of the population and raised the need to take urgent measures to improve the situation, were in the focus of the discussion and decisions made by His Holiness Patriarch Kirill of Moscow and All Russia and His Holiness Pope Francis of Rome during their meeting on February 12, 2016, in Havana.

At the instruction of the supreme authorities of the Moscow Patriarchate and the leaders of the Roman Catholic Church, a bilateral delegation visited Lebanon and Syria to see how certain aspects of the agreements reached can be implemented. The delegation included Archbishop Paolo Pezzi, head of the Archdiocese of the Mother of God in Moscow (Roman Catholic Church), Hieromonk Stephan (Igumnov), DECR secretary for inter-Christian relations, and Fr. Andrzej Halemba and Mr. P. Humeniuk, representatives of the Kirche in Not foundation.

During their stay in Beirut, the delegation met with the Maronite Patriarch Bechara Boutros Ar-Rahi and the Apostolic Nuncio in Lebanon Archbishop Gabriele Giordano Caccia. Participating in the talks was also Hegumen Arseny (Sokolov), representative of the Patriarch of Moscow and All Russia to the Patriarch of Antioch and All the East. The delegation also visited the city of Zahle, the largest city of Beqaa Valley, which has recently become a settlement region for 250 thousand refugees from war-engulfed Syria. The bilateral delegation saw the refugee camps which have become asylums for both Christians and Muslims and met with the heads of major Christian communities in that part of Lebanon, including Metropolitan Anthony of Zahle and Baalbek (Orthodox Church of Antioch), Metropolitan Issam  Darwish of Fourzol, Zahleh and Beqaa (Melkite Church). The guests also came to one of the soup kitchens organized by church social services for distributing daily lunches to refugees and the poor.

In Zahle, a seminar was held, during which representatives of the Orthodox Church of Antioch and the Melkite Church spoke in detail about the humanitarian situation in Beqaa and the efforts the local confessions made to help refugees from Syria.

On April 7, the Orthodox-Catholic delegation arrived in Damascus. They visited the cathedral of the Orthodox Church of Antioch and met with a group of its hierarchs including Bishop Ephrem of Seleucia, secretary of the Holy Synod, and Bishops Lukas of Seidna, Nicholas of Bloudan and Musa of Daraa. Speaking about details of the project, Father Stephan (Igumnov) pointed to the priority role played by the Orthodox Church of Antioch in local coordination as the largest and the most traditional confession in Syria.

Later that day, the delegation was received by His Holiness Mor Ignatius Aphrem II, Patriarch of the Syriac Orthodox Church. His Holiness pointed to the importance of the initiative taken by the Patriarch of Moscow and the Holy See and informed his guests about the latest changes in the situation in Syria including the recent liberation of the city of Al-Karyatein populated by the faithful of the Syriac Orthodox Church. His Holiness gave a high assessment to the role of Russia in these developments and conveyed words of gratitude to the Russian people.

The second part of the seminar, which took place in Damascus, focused on the humanitarian situation as a result of the Syrian crisis. The meeting, which took place at the Melkite Patriarchate, was attended, along with the delegation, by Bishop Ephrem of Seleucia (Orthodox Church of Antioch), Bishop Siloam al-Nemeh of Homs (Syriac Orthodox Church), Bishops Jean-Abdo Arbach of Homs and Joseph Al-Absi (Melkite Church), Bishop Gregorios Elias Tabe of Damascus (Syriac Catholic Church), Bishop Hovsep  Arnautian of Damascus (Armenian Catholic Church), Fr. Michel Freifer (Maronite Church), and Apostolic Nuncio of Damascus Archbishop Marion Zenari. Representatives of Christian confessions in Syria spoke about the actual situation in the region as most affected by terrorist attacks and the experience of humanitarian work with those who were forced to endure this tragedy. It was stressed that the aid given by Christian churches in the region was distributed to suffering Syrians regardless of their religious affiliation and reached both Christians and Muslims.

Representatives of Syrian churches also noted that in the recent time the situation in the country has tangibly improved and expressed gratitude to the Russian State for its decisive role in struggling against terrorism and for a settlement of the Syrian crisis. A number of the most important problems were outlined as requiring solution on the way to achieving the global goal of preservation of the Christian presence in the region. Among these problems is the need to restore churches and monasteries as traditional centers of consolidation of Christian communities, to provide jobs for people, especially the youth, and to rebuild the economic structure traditional for Syria. In doing so, the Syrians expect a full-scale assistance from the world community as the war is coming to an end in their country. The speakers stated that Christians did not want to leave their native land seeking to come back at the slightest opportunity and all the Syrian people are ready to work selflessly to restore their homeland.

The need was expressed to strengthen the coordination of humanitarian work between various Christian confessions in Syria and the meeting was a contribution to this effort. Its participants thanked the Russian Orthodox Church, the Holy See and the Kirche in Not foundation for having organized it. Special emphasis was made on the fact that the meeting between His Holiness Patriarch Kirill of Moscow and All Russia and His Holiness Pope Francis of Rome as the leaders of the world largest Christian communities and the statement they signed as its result became a sign of hope for Christians in the Middle East and a stimulus for them to intensify inter-confessional cooperation in the region.

The consultations with local communities held by the Orthodox-Catholic delegation during their trip to Syria and Lebanon will serve as a basis for developing further joint projects for giving support to brothers and sisters in distress. One of the priority tasks for the nearest future is to compile a detailed list of Christian shrines, churches and monasteries destroyed and damaged during the war in Syria and to intensify the common witness of Christians to the Syrian tragedy.