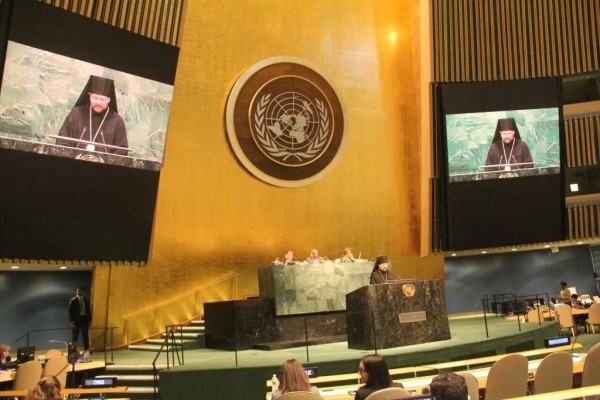 It was initiated by the President of the 69th Assembly Sam Kutesa together with the UN Secretary-General Ban Ki-moon with the support of the UN high representative for the Alliance of Civilization, Mr. Nassir Abdulaziz Al-Nasser.

Representatives of 56 states shared their opinions about the problems of overcoming extremism and establishing a lasting peace, among them representatives of the European Union, the UN Human Rights Council, the Parliamentary Assembly of the Mediterranean and others. Mr. V. Churkin, Russian Federation permanent representative to the UN, spoke on behalf of Russia.

On the second day of the debate, the UN rostrum was given to representatives of various religions. Among the speakers were representatives of Christian confessions, Judaism, Islam, Hinduism and Buddhism. The Russian Orthodox Church was represented by Bishop Ioann of Naro-Fominsk, administrator of the Patriarchal Parishes in the USA. He presented the Russian Orthodox Church’s vision of ways for settling conflicts existing in the world today, giving special attention to the problem of violations of the rights of Christians in the Middle East, Africa and other regions. He called political leaders to pay attention to the problem of Christianophobia and adopt ‘a more responsible and resolute approach to the settlement of existing problems in order to put an immediate end to the bloodshed and violence against innocent people’. 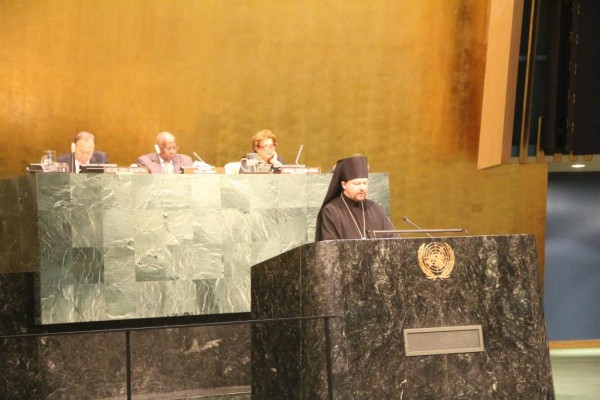 Bishop Ioann also spoke about the efforts made by Patriarch Kirill and the Russian Orthodox Church to attract the world community’s attention to the problems of today’s world during their meetings with political, public and religious leaders, in the mass media and at various international platforms and forums. He presented the positive experience of the Russian Church in conducting interreligious dialogue in the Interreligious Council in Russia, the CIS Interreligious Council and in the bilateral Russian-Iranian Commission for Dialogue ‘Orthodoxy-Islam’.

In conclusion, Bishop Ioann expressed the conviction that dialogue between religious and political leaders, including on the UN platform, can effectively help overcome many conflict situations.

In conclusion of the debate, the UN Secretary-General expressed hope that religious leaders will continue taking part in the efforts to settle conflicts and establish lasting peace, the website of the Russian Orthodox Church in the USA reports.