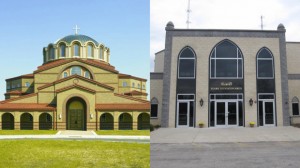 WAUKEGAN, Ill. (CBS) – Leaders of a north suburban mosque and a nearby Greek Orthodox church stood in solidarity Wednesday, after their houses of worship were vandalized over the weekend.

“It makes you feel like you’re hit in the gut,” said Bishop Demetrios, of the Greek Orthodox Archdiocese in Chicago.

Vandals spray-painted a smiley face and a hateful message “f*** the faith” on both houses of worship on Sunday night.

“Our doors remain open, and they will remain open. No one’s going to close our doors,” Demetrios said.

According to police, almost a dozen places of worship in the north suburbs have been vandalized since last Friday. Police have released surveillance photos of the suspect believed to be responsible for the vandalism.

Leaders of the mosque and the church held prayers at both locations Wednesday to show they are united against hate.

Local police were investigating the vandalism.