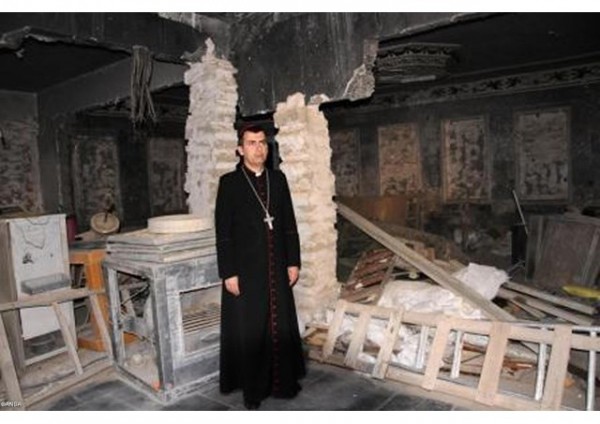 The Christians are among 500,000 thought to have fled Mosul whose overthrow yesterday is now followed by news today (Wed, 11 June) of militant attacks on the Iraqi city of Tikrit 95 miles north of the capital, Baghdad.

Describing reports of attacks to four churches and a monastery in Mosul, the archbishop, 46, said: “We received threats… [and] now all the faithful have fled the city. I wonder if they will ever return there.”

The archbishop, who in the ensuing crisis sought sanctuary in Tal Kayf, a village two miles from Mosul, described how the local community were doing their best to provide for crowds of people flooding out of the city and into the surrounding Nineveh plains, where there are a number of ancient Christian villages.

“Up at 5am yesterday [Tuesday, 10 June] morning we welcomed families on the run and we have tried to find accommodation in schools, classrooms and empty houses.”

He said: “We have never seen anything like this – a large city such as Mosul attacked and in chaos.”

He said that in the 11 years following the 2003 US-led overthrow of Iraq’s President Saddam Hussein, Christians in Mosul had declined from 35,000 to 3,000 and that “now there is probably no one left.”

The archbishop said the attacks on Mosul began last Thursday (5 June) but were initially confined to the western part of the city.

He said: “The army began bombing the affected areas but later in the night between Monday and Tuesday, suddenly the armed forces and the police left Mosul, leaving it to the mercy of the attackers.”

The archbishop questioned reports claiming the militants responsible for the attacks are part of the Islamic State of Iraq and Levant (ISIS), a terrorist organisation linked to Al-Qaeda and in control of key areas of north-west Syria.

He said: “I do not know yet who the group is behind these attacks. Some speak of ISIS, others think other groups are responsible.

“We have to wait until we have a better understanding of the situation. What we do know is that they are extremists, many people have seen them patrolling the streets.”

Swimming Away From Fhe Dead Sea

From the beginning of the world, ever since Adam and Eve stopped…

Most viewed articles
The Worst Year Ever – Or Was It?152
Resentment, Guilt, Forgiveness: What Should Everyone Know About Them?132
Statement from the Chancery of the ROCOR Synod of Bishops on Recent Events at St. Alexander Church in Jerusalem117
South Carolina Passes Pro-Life Bill That Takes Aim at Roe V. Wade73
Swimming Away From Fhe Dead Sea59
Orthodox Service “Mercy” to Open a Rehabilitation Center for Homeless54
Psalm Read at Times of Doubt, Hesitation, and Strong Temptations for Strengthening of Faith40
Orthodox organization invites children to strengthen faith through a short film competition35
The Transfiguration of Our Lord and Savior Jesus Christ1
Most popular authors
Pravmir.com team171
Archpriest Geoffrey Korz152
Konstantin Olkhovoy132
Madison Ferguson73
Fr. Gabriel Bilas59
Metropolitan Anthony (Pakanich)40
Ștefana Totorcea35