Mosul’s Christians ask, ‘Where is the conscience of the world?’

Source: Digital Journal.com
"Things are so desperate, our people are disappearing. We have had people massacred, their heads chopped off. Are we seeing the end of Christianity? We are committed come what may, we will keep going to the end, but it looks as though the end could be very near."
Karen Graham | 28 July 2014 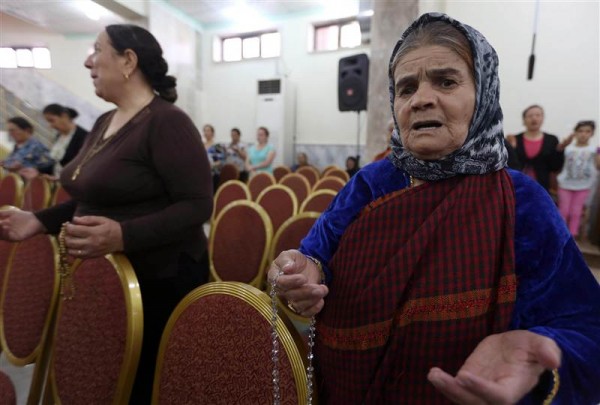 On Saturday, the Vicar of the only Anglican church in Iraq warned that the end was “very near” for Christians in that country. Mosul is Iraq’s second largest city, and six weeks ago, 35,000 Christians lived there. Today, there are no Christians in Mosul.

Canon Andrew White spoke with BBC Radio 4’s Today on Saturday, saying, “Things are so desperate, our people are disappearing. We have had people massacred, their heads chopped off. Are we seeing the end of Christianity? We are committed come what may, we will keep going to the end, but it looks as though the end could be very near.”

Christians have lived in the city for nearly 2,000 years, all the way back to the time of Jesus Christ. A number of groups, including Assyrian Christians, Chaldean and Syriac Catholics, Syriac Orthodox and members of the Assyrian Church of the East have their roots in present day Iraq, Turkey, Syria and Iran. They have been a minority in a predominately Muslim world, and have faced persecution at different times over the centuries. But they have never been completely driven away.

But this is exactly what ISIS has done, under the threat of execution. All Christians and Shia Muslims were given an ultimatum, either convert to Islam, or pay the equivalent of $750 per adult male, a sort-of poll tax, called a “protection fee.” Any Christians or Shia Muslims remaining in the city, and not converting or paying the protection fee were told in letters that there would be “a sword between you and us.”The Vicar came to London to speak and raise awareness of the situation in Iraq. “The Christians are in grave danger. There are literally Christians living in the desert and on the street. They have nowhere to go,” he said.It should be noted that many of Mosul’s Christians had already left the city prior to ISIS’s proclamation because of all the fighting and bombings at the start of the ISIS takeover in Mosul. By the time the letters were posted and the announcements were made in all the Mosques, there were perhaps 1,500 Christians left in the city. When they fled last Saturday, it was with the clothes on their backs, being forced at gunpoint to leave any wealth, jewelry or anything of value behind.In making his own nation and setting up his Islamic Caliphate, Abu Bakr al-Baghdadi, was able to take advantage of the lack of a centralized authority in Iraq and Syria. Since the last of the Christians have departed the city, Christian churches have had the insides gutted, crosses and statues of the Virgin Mary destroyed, and many have been converted to Mosques. Survivors who fled the city tell gruesome stories of beheadings, crucifixions and worse being perpetrated by ISIS rebels.

Many clergy are fearful that the Christian Church will never return to Mosul. They talk of the 1,800 year old edifices that have been put to the torch, the shrines that have been destroyed, and they beg for the world to take notice and help them in their plight. Iraqi Prime Minister Nouri al-Maliki condemned ISIS’s actions, as did Pope Francis. But now, those Christians are refugees, some finding haven with the Kurds, while the majority went to Dohuk, which is 87 miles north of Mosul. Will the world hear their pleas?