This is the earliest image of the “Madonna and Child,” the Virgin Mary holding her son. It’s found in the Catacomb of Priscilla in Rome, and dates to the early 200’s. At the time this image would have been so new that people might have wondered what it was, so the artist depicted a prophet standing beside her, pointing to a star. Perhaps this is the seer Balaam, who said “I see him, but not now; I behold him, but not near. A star shall come out of Jacob, and a scepter rise out of Israel” (Numbers 24:17-19). 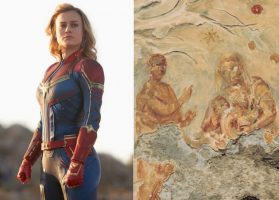 As familiar as the mother-and-child image is now, I was thinking how rare it would have been before Christ came. There’s usually no reason to depict a mother and nursing child. It’s not a heroic image, not particularly glorious or amazing; it’s as everyday as a mother kneading bread or hanging out the wash. And yet we put it in our worship places, right beside images of Christ and the great heroes of our faith.

Today, the most familiar images of heroic women would be those of female superheroes, who courageously do battle alongside men. That is, they do the same things men do. We admire them for being “just as good” as men are—not for doing something distinctive that only women can do.

It reminds me of something my son Stephen (now Fr Steve Mathewes) said when he was a boy. He was watching one of those movies where a girl has to fight to be included on a boys’ baseball team, and then ends up hitting the home run. He said, “It’s like they think the best thing a girl can be is a kind of honorary boy.”

The Virgin Mary didn’t win her place in our hearts by doing something “just as good” as a man. She wins our love for doing the ordinary things women have done through history—pregnancy, birth, nursing a baby. This is dismissed as “women’s work,” and it doesn’t play a big role in our history books, and important men have mostly ignored it. Yet without that continuous stream of “women’s work,” history itself would come to an end. I’m glad that we have raised up, in the midst of our faith, an image of a young woman doing something no man could have done. I’m glad that at the center of our faith we’ve placed an image of a mother, doing what comes naturally.