My Pascha: When Everyone Around Me Started Singing, I Got Goosebumps 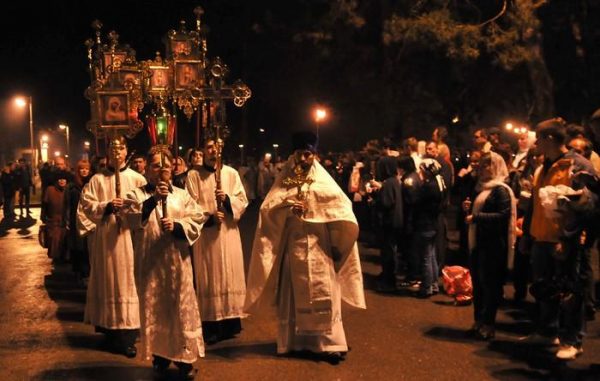 My family was not very religious, we did not go to the church regularly, but rather visited it occasionally – stood there for a while, lit a candle. These memories are fragmentary – no one explained anything to me as a child. If I had questions about faith in God, I didn’t find answers to them: I didn’t know what to ask, and I didn’t really have anyone to ask. From the rare visits to the church, I had the feeling that the church was a special, mysterious place in which something very important happened.

I would like to tell you about one event that greatly influenced my decision to become a Christian. It happened on Pascha in 2001. Then my friends and I decided to go to the church for the Paschal service. We called it “going to the cross procession.” Naturally, no one really understood why they needed to go there and what they were doing there, but everyone knew that “it was necessary”. Well, they say it is necessary, so be it, why not. To me, a fourteen-year-old teenager, it even seemed a little amusing.

My friends and I were all about the same age, two of my friends were a little older than me, none of us had a clear idea of ​​what the Church and church life is. We arrived at the beginning of the Paschal night service. At that moment, I didn’t know anything about what was happening around me: we were standing outside, in front of the church, people were walking past us with lighted candles in their hands – they were in the cross procession that takes place before Pascha Matins around the church and ends in front of the closed doors of the church. I remember how people finally stopped at the entrance to the church. Silence reigned. In this ringing silence, the priests sang something (it was the troparion of Pascha), and then the people standing around me started singing along. Everyone who stood next to me was singing. Before me, at my side, and behind me, people were singing something that was completely unfamiliar and incomprehensible to me, but familiar and understandable to them. They sang something about Christ, it was the Paschal troparion: “Christ is risen from the dead, trampling down death by death.” From the fact that everyone around me was singing something together at once, I almost laughed, but looking around I realized that the people around were very serious, I saw the concentrated faces of my friends, I heard that they were also singing This, and I got goosebumps – everything seemed so unusual, different, strikingly different from my everyday life. I was amazed that all these people, unfamiliar to each other, complete strangers, suddenly for a moment became close to each other, they were somehow united, there was a sense of unity. And I felt ashamed both for my first desire to laugh and for the fact that I was a stranger here, because I didn’t know exactly what to sing and what these words meant. I felt that there was a special life around me, a life that I wanted to be a part of.

A few months later I received the sacrament of Baptism.