Source: OrthoChristian
An interview with Gabriel Schakaraschwili, who moved to Georgia from the U.S. after discovering his Georgian Orthodox roots.
Kyrylo Myazha | 09 September 2021 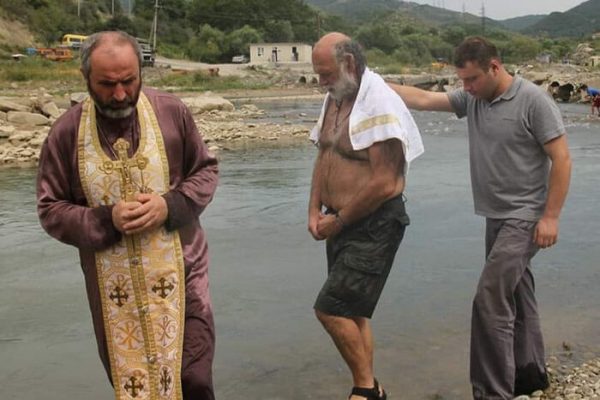 Within the Anglophone Orthodox community of Tbilisi, one of the most interesting members of this newly established Church is Gabriel Schakaraschwili. An interview was conducted with him at his family’s ancestral village of Doesi near the city of Gori, 1.5 hours from the capital of Tbilisi, which was also the home village of the Georgian Patriarch Ephraim II, who led the Georgian Orthodox Church from 1960 to 1972.

—Gabriel, can you give some quick background information on yourself and how you ended up moving from the United States to your ancestral homeland of Georgia?

—I was born in 1952 in Rome, Italy, where my mother was originally from, and where she met my father after the Second World War. As for my father, his background is fascinating, and I credit my ethnic background as a Georgian to eventually bringing me to the Eastern Orthodox faith. My father, like the majority of Georgian men during the Second World War, was drafted into the Soviet military, but throughout his life, he spoke little about his military service. It wasn’t until I discovered two photos of him, one in a Soviet Army uniform and the other in a Nazi German uniform, that he told me about how his unit defected to the Nazis due to their personal anti-communist beliefs and wanting to re-establish an independent Georgia. After the war, my father was captured by the U.S. Army (Patton’s Third Army) and sent to a prisoner of war camp in Italy. Sadly, some of his comrades were sent back to the Soviet Union, and he never heard from them again because they were almost certainly sent to the gulags for their participation in the Nazi Georgian Legion. Regarding my father’s family, they received word at some point during the war that my father went missing, and it wasn’t until 1960 that they received word from him that he was alive.

—What was your family life like after the Second World War, and when did your family immigrate to the United States?

—My family immigrated to New York City when I was three years old (1955); at the time, there were very few Georgians living in the United States due to a complete lack of immigration for over thirty years. Because of this, I was primarily raised with an Italian-American identity and attended Roman Catholic schools throughout my childhood. Additionally, I learned the Italian language, but not the Georgian language, as I didn’t see it as useful during my childhood due to the complete lack of Georgian immigrants and because Georgia was part of the Soviet Union. —I always knew about my Georgian ethnicity due to my father and family name, despite the changes that the Nazis had made to it. The correct spelling of my name is Shaqarashvili, but it was Germanized to Schakaraschwili. That being said, throughout my adult life I lived as a typical Italian-American of my generation and lived a largely secular lifestyle, with the exception of being a Protestant Christian for six years after college. It wasn’t until 2012 that I connected to my Georgian roots, instigated by my nephew contacting me on Facebook in March of 2012. He invited me to visit Georgia, and I was able to visit my ancestral homeland in July of 2012. During my visit, I was able to see multiple religious and cultural monuments throughout eastern Georgia. The trip included my home village of Doesi, where I saw members of my extended family whom I had never seen before. One of my visits included the Ethnographic Museum of Georgia, and this was where my journey to the Orthodox faith truly began.

—What happened at the Ethnographic Museum to make you interested in the Orthodox faith, and did you previously know about Orthodoxy before coming to Georgia?

—Before coming to Georgia, my exposure to Orthodoxy was minimum, as the vast majority of Americans and I only had a vague knowledge of the Orthodox faith. I knew that Georgia was Eastern Orthodox, but my father didn’t mention the Orthodox faith personally to me. Besides, in the United States, less than one percent of the population is Eastern Orthodox. At the Ethnographic Museum, I ended up having a conversation with one of the police officers who, because of my appearance, asked if I was Georgian. I answered that yes, I was Georgian, and he immediately asked if I was also Orthodox. To this question, I answered no, and the police officer responded that to be truly Georgian, I had to become Orthodox. After this, I began to desire to be baptized into the Orthodox faith, and through my nephew, I was able to organize my Baptism with a Georgian Orthodox priest he knew. My Baptism was held in the Aragvi River, which is located right outside of Mtskheta (the ancient capital of Georgia). Providentially, I was able to be baptized the day before I was scheduled to fly back to the United States, where I resided until 2020.

—Did you visit Georgia between 2012 and 2020? What prompted you to reside permanently in Georgia starting in 2020?

—Yes, I visited Georgia for about a month on an annual basis during this period, and my main reason for staying in the United States was because I was nearing retirement age. When I was able to retire in 2020, I moved to Georgia, and have lived at my Georgian family’s home in the village of Doesi since then.

—Since moving to Georgia permanently, has this improved your Orthodox faith, and what do you do in your village?

—Moving to Georgia has been hugely helpful for my Orthodox faith, as being a devout Orthodox Christian within Georgia is looked upon positively, especially for an individual like myself who converted to the faith as an adult. In addition to this, there are numerous holy sites, churches, and monasteries I can visit throughout Georgia. In just my village of just over 2,000 people, there are two Orthodox Churches! This is completely unlike the United States, where it’s difficult to find an Orthodox Church and where the Orthodox faith is looked down upon as strange. The culture is also far more socially conservative than the United States, and among regular people here, there is a strong emphasis upon the importance of one’s culture, family, and traditions. Also, my family has been highly supportive of my faith and will prepare fasting foods for me throughout the liturgical year.

(When asked about how his family views him after his conversion, his cousin responded that “Spiritually, Gabriel belongs to us now that he is Orthodox, even though he was born in America”). As for my life in the village, I typically help my family in their large garden and in making repairs to their home. Because of my retirement income, we’ve been able to upgrade the house with a new, small tractor, a new roof, a new room, and new appliances. When I’m not doing this, I study the Georgian language, which is the main barrier at this time for me becoming a Georgian citizen and for full integration into Georgian society. Twice a week I travel down to Tbilisi for the English Liturgy at the Church of St. George, where I’ve been assigned as one of the readers for the English Vespers. This has been hugely important for me, as the English Liturgy touches me personally, because English is my native language; and after Liturgy, I can interact with fellow foreign English-speaking Orthodox.

Regarding my church, I wanted to mention an ongoing fundraiser for the construction at this missionary parish, which can be found at the following link: https://givesendgo.com/G27AF.

Overall, my life in Orthodox Georgia is very happy, and my family here has been hugely influential in this. Growing up, I had only my immediate family (father, mother, and brothers), but here in Georgia, I can enjoy living with my extended family; and I’m related to a substantial portion of the population of my village. This has enriched my life along with my Orthodox faith, which has completely changed my outlook on life for the better.