“There is no need to improve relations between the Orthodox and the Muslim world.”

Source: APA
Natalya Mihailova | 27 September 2014
Moscow. Farid Akbarov - APA. "There is no need to improve relations between the Orthodox and the Muslim world. Because the relations are pretty good," said the Patriarch of Moscow and All Russia Kirill to APA’s Moscow correspondent 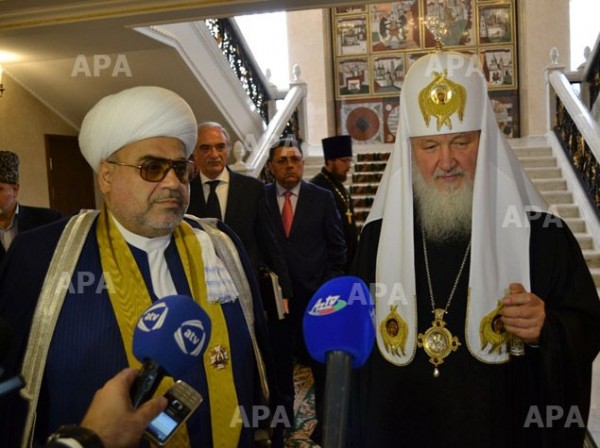 He noted that he has excellent and friendly relations with chairman of Caucasian Muslim Board Sheikh-ul-Islam Haji Allahshukur Pashazadeh: “We are in constant working contact. Nagorno Karabakh conflict is one of the issues, which we are working on together. Today we discussed further steps on the settlement of this problem. We also discussed the processes in the Middle East, which is a threat to the entire world. Radical forces use the religious factor. All these worry both Muslim Azerbaijan and Russian Orthodox. ”

The Patriarch said that his visit to Baku is on the agenda, but the exact date is not yet determined.

Sheikh-ul-Islam Pashazade expressed his satisfaction with the meeting with Patriarch Kirill: “Today we discussed not only the religious relationship between Muslim Azerbaijan and Orthodox Russia, but the peaceful settlement of conflicts in the Middle East, as well as the problem of Nagorno-Karabakh and the situation in Ukraine.”