New Head of Antiochian Church in America Enthroned; Antiochian Patriarch to Meet with Officials on Issues in Syria 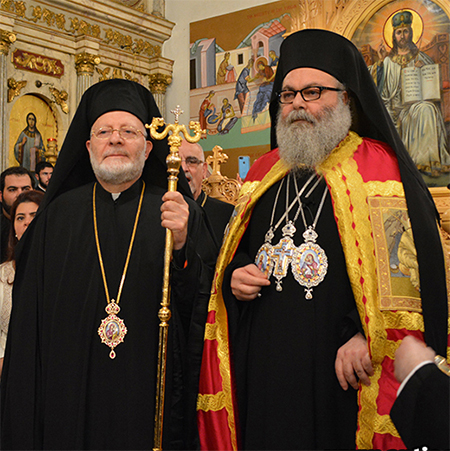 On  Sat. Dec. 6, the Patriarch of Antioch and All of the East, Patriarch John X of Damascus, Syria, enthroned Metropolitan Joseph as new head of the Antiochian Orthodox Church in North America at that Church’s national St. Nicholas Cathedral in Brooklyn, New York.

He now heads the entire Antiochian Orthodox Church in America, with nine bishops, over 400 clergy, 266 parishes and missions, and about 100,000 faithful throughout the United States and Canada. Over the last 40 years, the Antiochian church has received a sizable number of converts to Orthodoxy in the Americas.

At the enthronement, Metropolitan Joseph talked about his plans to be out among his people in the United States and Canada, with a special emphasis on engaging youth and meeting their needs.

“We must listen to our young people and find out how we, the Church, can help them and appeal to them,” Metropolitan Joseph said.

The Antiochian Orthodox Church worldwide is headed by the Patriarch of Antioch John X and is the largest Arab Christian church in the world, with churches in the Middle East, Europe, North and South America and Australia.

Patriarch John X came to the United States to enthrone Metropolitan Joseph at a time when his homeland, Syria, is racked with strife by ISIS extremists. So while in the U.S., he will also meet with the Secretary General of the United Nations and the White House about the situation of Syrian Christians today.

The Patriarch’s brother, Orthodox Bishop Paul Yazigi of Aleppo, Syria, was one of two church hierarchs kidnapped almost two years ago in Syria. Nothing is known of his whereabouts.

“For centuries Arab Christians and Muslims in Syria have lived alongside one another in harmony,” the Patriarch said. “And now we have these foreign elements who have come into our country and disrupt our peace.”

The Antiochian Orthodox Christian Church is the world’s oldest Arabic Christian Church. It was founded by Ss. Paul and Barnabas in 42  A.D. and its first bishop was St .Peter the Apostle, who later went on to be Bishop of Rome. Patriarch John X is the 167th successor of St. Peter.

The Orthodox Church is the second largest Christian Church in the world, with over 250 million adherents.

Most viewed articles
Living in Apocalyptic Times213
Into the Heart of the Capitol171
Patriarch Kirill Speaks on the Role of the Deceased Metropolitan Philaret in the Revival of Church Life in Belarus72
Admitting That We Hate62
“Bus of Mercy” Helps Homeless in Magnitogorsk48
Homily on the Circumcision of Our Lord Jesus Christ33
Funeral for Metropolitan Philaret Held in Minsk21
Most popular authors
Hieromonk Gabriel213
Archpriest Stephen Freeman171
Pravmir.com team141
Archpriest Michael Gillis64
Protopresbyter George D. Konstantopoulos33
Maria Trushanina1