Source: Basilica.ro
His Beatitude Patriarch Daniel received the ambassador from the Hashemite Kingdom of Jordan Sufyan S. Qudah during a private audience at the patriarchal residence in Bucharest, on February 6, 2020.
Aurelian Iftimiu | 08 February 2020 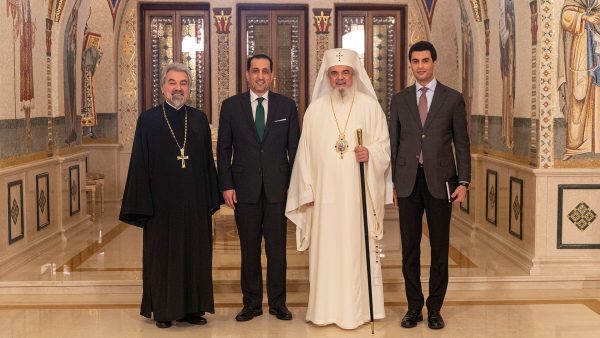 Patriarch Daniel expressed his joy to meet the ambassador. He pointed out the considerable number of Romanian Orthodox pilgrims who visit Jordan every year through the Romanian Patriarchate’s Basilica Travel Agency, thus contributing to the promotion of good relations between Romania and the Hashemite Kingdom of Jordan.

That is why, the Romanian Patriarchate wants to improve and expand the pilgrimages of Romanian believers in the Holy Land and, at the same time, appreciates the organization of annual pilgrimages of young Orthodox from the Middle East to Romania.

The ambassador of the Hashemite Kingdom of Jordan thanked the Patriarch of Romania for the warm welcome and appreciated His Beatitude’s wisdom and courage in leading the Romanian Orthodox Church, including as regards the positive contribution to the universal Orthodox Church.

His Excellency recalled that, since 1965, over 37,000 Jordanian youths have studied in Romania, which is a remarkable fact, evidenced by the presence of two ministers in the current government in Amman, as well as other personalities working in different state institutions of the Hashemite Kingdom of Jordan.

The Patriarch of Romania mentioned that all pilgrims belonging to the three monotheistic religions must have the freedom to visit the Holy Land. In this regard, His Beatitude expressed his gratitude to His Majesty King Abdulah II for the protection of the Holy Places. In this context, His Beatitude Patriarch Daniel underscored the particular importance of promoting dialogue between religious communities and between states.