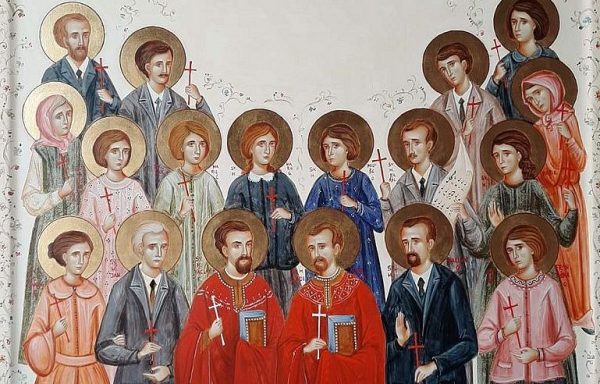 On Saturday, February 8, 2020 in the Orthodox Cathedral in Prague, the Orthodox Church of the Czech Lands and Slovakia canonized as martyr-saints several clergy and lay people who were martyred by the Nazis during World War II.  The new saints include the priests Father Vladimir Petrek, Father Vaclav Cikl and the laymen Jan Sonnevend, Vaclav Ornest, Karel Louda and their families.  All these Orthodox Christians suffered for Christ with their Bishop Gorazd Pavlik who had been previously canonized as a martyr-saint in 1987.  (see acrod.org;  Orthodox Reading Room,  Lives of the Saints).

The story of the new martyrs begins September, 1941 when Reinhard Heydrich was appointed as the Nazi Deputy Reich-Protector (Governor) of Bohemia and Moravia.  Heydrich had a reputation as a violent, heartless Nazi.  Adolph Hitler called  him “The man with the iron heart” and others referred to him as “The Butcher”.  Within five days of his arrival in Prague, 142 people were executed and it was Heydrich who was the architect and key organizer of the Holocaust which led to the extermination of over six million Jews and others.  Today, as we look at the historical photos of piles of emaciated bodies in Nazi concentration camps, we ask:   “Did anyone care?  Why didn’t someone stop this evil?   Why didn’t someone do something?

In May, 1942 a group of courageous people did take action to stop this evil.   The Allied forces had previously secreted into the region several members of the Czechoslovak army in exile.  The code name for their mission was Operation Anthropoid and its goal was the removal and assassination of Reinhard Heydrich.  On the morning of May, 27, 1942 Heydrich was being driven to his Prague office in an open top car.  Stepping out into the roadway the Czechoslovak soldiers opened fire with a machine gun and a bomb which led to Heydrich’s death several days later.

The Nazis unleashed a wave of terror in reprisal for Heydrich’s assassination. On  June 9, in the village of Lidice 172 boys and men between age 14 to 84 were shot, women and children were deported to concentration camps.  The same pattern repeated in the village of Ležáky:  all adults were murdered.  In Prague the Czechoslovak soldiers took refuge by hiding in the Sts. Cyril and Methodius Orthodox Cathedral while the Nazis began a furious search for their hideout.  After a ferocious gun battle, all of the soldiers were killed in the crypt of the Cathedral.  The Nazis then turned their wrath on the leadership of the Orthodox Church:  Bishop Gorazd Pavlik with his priests Fathers Vladimir Petrek and Vaclav Cikl were tortured and executed by firing squad.  Jan Sonnevend, Vaclav Ornest, and Karen Louda, lay leaders of the Orthodox Cathedral in Prague were likewise subjected to torture and executed by firing squad. Today, at the site of their martyrdom at the Kobylisz Shooting Range, a monument has been erected in their memory and those others who suffered at the hands of the Nazis.   Sonnevend’s wife Marie, daughter Ludmilla and her husband along with Father Cikl’s wife Marie were sent to the Mauthausen concentration camp where they were all executed.  These news martyrs are known as “The Holy New Martyrs of Bohemia” and are remembered each year on their feastday of September 5.

The assassination of Reinhard Heydrich raises troubling theological and ethical questions.   St. Paul in his epistle to the Romans wrote “Repay no one evil for evil…..Do not be overcome by evil, but overcome evil with good.  (Romans 12:21)  This Biblical teaching is clear but the question remains:  is an act of violence ever permitted to stop greater evils from occurring? Was the act of the Czechoslovak partisans necessary to try to stop the Nazi atrocities against Jews and others?   Some theologians and ethicists refer to these questions as the “just war theory”.  This theory holds that war is always an evil act to be avoided but there exist exceptions such as to defend the innocent or to prevent greater evils and violence.  While the just war theory was proposed by St. Augustine, a 4th century bishop in North Africa the other Fathers of the early Church agree that war and violence are always evil but at times they are the lesser of greater evils.  The Church has always advocated for peace and seeks the peaceful resolution of differences.  However throughout history there exist many examples of the unfortunate need for war and acts of violence to protect the innocent and to stop evil.  The Church, following the teaching of St. Paul, has canonized as martyrs Sts. Boris & Gleb who in the 11th century accepted a violent death at the hands of their brother rather than defend themselves against him with violence.  These two brothers are honored with the title “Passion-bearers” meaning they imitated the Lord Jesus in the acceptance of His passion and death.  My own patron saint:  the 10th century King Edward of England is also honored with the title “Passion-bearer” for his refusal to defend himself with violence.  On the other hand, the Church also honors soldiers who gave their lives in battle and has canonized numerous warriors as saints such as the early Christian martyrs St. George and St. Demetrios and St. Alexander Nevsky, the warrior-prince of Russia.  The Church remembers the words of our Lord:  “Greater love has no one than this, than to lay down one’s life for his friends”.  (John 15:13)

In 1999 Patriarch Bartholomew of Constantinople summarized the teaching of our Church:

“War and violence are never means used by God in order to achieve a result. They are for the most part machinations of the devil used to achieve unlawful ends. We say “for the most part” because, as is well known, in a few specific cases the Orthodox Church forgives an armed defense against oppression and violence. However, as a rule, peaceful resolution of differences and peaceful cooperation are more pleasing to God and more beneficial to humankind.”

Tropar of the Holy New Martyrs of Bohemia   (Tone 4)

Today we all praise Christ who is both God and man,
Who is glorified in His witnesses,
the priests Václav and Vladimir, together with the faithful members of God’s people,
the martyr Ján, and a host of men and women who did not fear the tyranny of the godless,
but full of the hope of immortality,

In my years of working with terminally ill patients as a hospice chaplain, the saddest situations I sometimes…