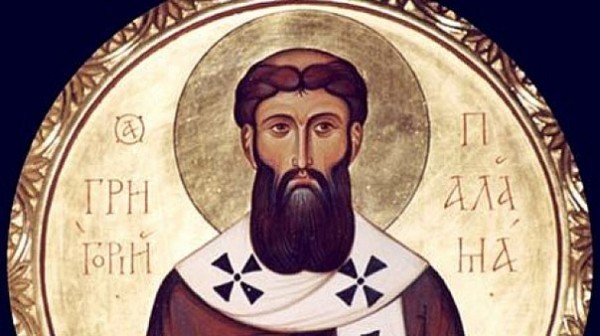 In my years of working with terminally ill patients as a hospice chaplain, the saddest situations I sometimes face is individuals who had laid out a vision for their lives: a retirement of traveling, leisure, a boat and house in Florida only to have these visions dashed by the scourge of a devastating illness. These people often scrimped and saved and endured difficult jobs for years in order to reach their vision of living “the good life”.

Everyone has a vision of what their idea of “the good life” for themselves: I’m waiting for the day when….. I’m looking forward to the day when….. We often fail to realize that God has a vision for our lives, He has a deep desire for each of us as our loving Father. St. Gregory Palamas is one of the greatest saints of our Church because he clearly described and explained God’s vision for our life: to know Him, to experience Him, to share His life, to become one with Him.

St. Gregory was born in Constantinople in the year 1296 to a wealthy family, his father a member of the senate of the Byzantine empire. St. Gregory was personally known by the Emperor Andronikos II Paleologos who admired the youth’s intelligence and talents and hoped to use his service in the imperial court. Gregory, however, like Mary the sister of Lazarus who sat at the Lord’s feet, was searching for “the one thing needful” (Luke 10:42) , that is, the one thing that is eternal and will truly satisfy a man’s heart. Gregory set off to the monasteries of Mount Athos, Greece to seek a deeper relationship with God. There Gregory became a disciple of experienced spiritual guides who taught him what is called the Prayer of the Heart or the Jesus Prayer which is based on Luke 18:38: Lord Jesus Christ, Son of God, have mercy on me a sinner. Gregory learned to combine this prayer with solitude and silence combined with physical exercises and breathing methods. This practice of prayer is known as hesychasm from the Greek word hesychos meaning inner stillness, peace or silence. Through this practice of prayer Gregory and his fellow monks fulfilled the command of the Holy Apostle Paul to “pray without ceasing”. (1 Thessalonians 5:17) From this experience of prayer, along with repentance, fasting, struggle against the passions and service to their brethren, the monks experienced God’s vision for their lives: to know Him, experience Him, share His life, to become one with Him.

In the year 1326 with the threat of a Turkish invasion hanging over Mount Athos, Gregory moved to the city of Thessalonica where he was ordained as a priest. There he divided his time between his practice of hesychasm and service to the people of the city. He later returned to Mount Athos, serving for a time as the abbot of Esphigmenou Monastery. He was eventually consecrated as the metropolitan of Thessalonica in 1347. In 1354 a ship he was sailing on was captured by Turkish pirates, he was beaten, imprisoned and eventually ransomed. He died on November 14, 1359 with his dying words “To the heights! To the heights!” He was canonized by the Church in 1368. His teachings are so important that the Church honors his memory twice a year: November 14/27 and on the second Sunday of Great Lent.

What is most important about St. Gregory Palamas is not the details of his life but his clear explanation of the Orthodox Faith: the Orthodox teaching about God’s vision for our lives. Gregory taught that we cannot experience God through education, philosophy, intellectual discussion and debates. God is a person with whom we are to be in a relationship, not a topic to be discussed or facts to memorize. He taught that God desires us to know Him, to experience Him, to share His life, to become one with Him. Even today, there exists a tendency in some non-Orthodox Churches to focus on knowing about God and these churches resemble lecture halls in which pastors deliver lengthy sermons which are the focus of the Sunday worship. The center of these churches is a man in a pulpit rather than the presence of God on the holy altar. The mphasis seems to be learning about God more than experiencing God. Gregory studied the Holy Scriptures, read the early Church Fathers and learned from his own experience on Mount Athos that it was possible to know and experience God in this life. This is what our Lord prayed for in His final prayer before His passion and death, that we share His life and become one with Him:

The Holy Apostle Peter says we are destined and called to “partake of the divine nature”. (2 Peter 1:4)

St. Gregory was vehemently opposed by other theologians among them a man named Barlaam who taught that education and learning are more valuable than hesychastic prayer. Barlaam said it was heresy to claim that one could know God, as a prayer of the Divine Liturgy says: “You are God, ineffable, inconceivable, invisible, incomprehensible…” Gregory agreed that God was unknowable and beyond human approach. But he drew a distinction between knowing God in His essence and knowing God in his energies or actions, the means by which He acts. St. Gregory knew the teaching of the early Church, especially the fourth century St. Basil the Great who taught:

We know our God form his energies, but we do not claim that we can draw near to His essence. For his energies come down to us, but His essence remains unapproachable. (Letter 234)

Essence….engeries….hesychasm….what does this have to say to my life? My life consists of work, mortgage, bills, family. In the midst of our busy lives we need to remember and keep in focus the meaning and purpose of life. Do all the things I experience each day have a higher meaning and purpose? Is there a goal to my life? Another hospice patient that I once visited had a large poster hanging over his bed. The poster pictured a mansion on a hill overlooking the ocean. In the open garage doors were several expensive cars such as a Mercedes, BMW, Lamborghini. The caption on the poster read: “Justification for a Higher Education”. This seemed to be the man’s motivation and goal in life: to accumulate “stuff”. Unfortunately he was dying of cancer and never obtained the house and the cars he was striving for. What he did accumulate was all being left behind. God’s desire for us is something better than an expensive piece of machinery….He wants to know Him, to share His very life, to become one with Him in a relationship that will have no end. This is what St. Gregory Palamas reminds us. This is the purpose of our prayer, liturgical services, fasting, struggling against our sinful passions.

For us priests, the life and teachings of St. Gregory offer another challenge. How do we become good priest and servants of Christ? The temptation is to seek more education and advanced degrees: Masters degrees, Doctoral degrees. While clergy do need a solid theological education along with education in the arts and sciences, the teaching of St. Gregory Palamas reminds us that fruitful, worthy priestly ministry is measured by the time spent on our knees rather than sitting in a classroom. The teaching of St. Gregory reminds us that the study of theology is not an academic exercise but a tool in coming to know God, to experience Him, to enter into communion with Him.

Your tongue, watchful in teaching,

rings in the ears of our heart and awakens the souls of the slothful.

Your words, inspired by God are a ladder leading us from earth to heaven.

O Gregory, wonder of Thessalonica, pray to Christ without ceasing,that we who honor you may be illumined with the divine light.