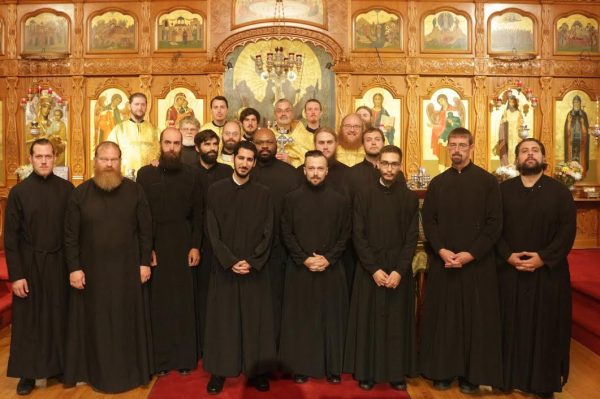 The new academic year began on September 1 with the celebration of the Divine Liturgy at which Father Steven presided.  Concelebrating were Priests Patrick Burns, SVOTS Alumni President, and Priest Ignatius Gauvain, Director of Student Life.  Seminarian Deacons Mikel Hill and Basil Ferguson also concelebrated.  At the end of the Liturgy, prayers were offered for the monastery and seminary at the beginning of the new ecclesiastical year, and new students were blessed to wear their cassocks.

Alumni came together for a continuing education program with the new and returning seminarians.

“With special thanks to the work of many during this past week, especially Fathers Ignatius and Patrick, who spent most of the week at the seminary, we are off to a very good start for the new year,” Father Steven concluded.