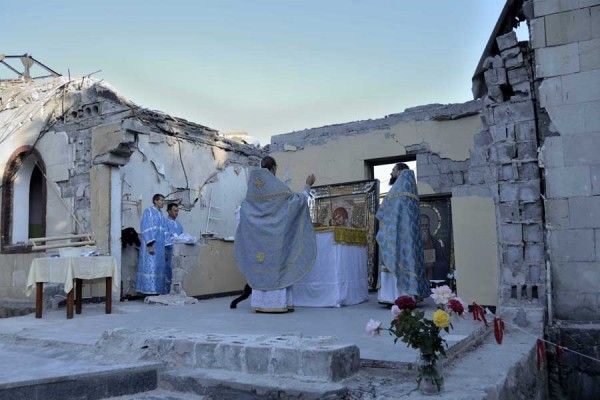 “On December 18, 2014, some people wearing army uniforms, who referred to themselves as members of the Ukrainian Armed Forces, robbed the country residence of the Donetsk Eparchy in the village of Peski, Yasynuvata district, Donetsk region. We are asking you, dear Pyotr Alexeyevich, to ensure a proper and impartial inquiry into the event,” according to the letter, which was posted on the website of the Ukrainian Orthodox Church.

Five eparchies in the Donetsk and Luhansk regions are still active and include over 1,100 churches, 17 monasteries, about 1,100 priests and over 350 monks, Synod members aid.

There were attempts by representatives of the self-proclaimed Kyiv patriarchate to seize parishes in the Kiev, Lvov, Ternopol, Volyn and Rovno regions, the letter’s authors said.

“By now, 14 parishes of our Church have been seized. The situation in six other ones remains tense. Unfortunately, the Ukrainian laws regarding the Ukrainian Orthodox Church are normally being violated with tacit approval, and sometimes even at the behest, of local authorities,” the letter said.

The Synod also reassured Poroshenko that it favors “the political independence and territorial integrity of Ukraine.”