Source: Rudaw
Natalya Mihailova | 01 July 2017
ERBIL, Kurdistan Region – Christians from the Nineveh Plains are closely watching developments to see what their future in Iraq will be. Persecuted by ISIS, some have called for international protection. 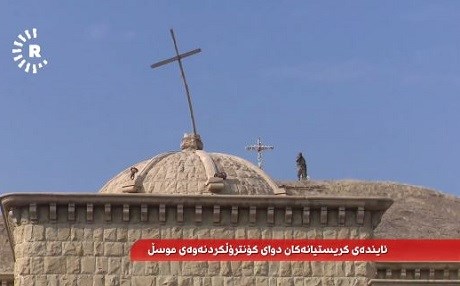 Salim Yusif is from the town of Hamdaniya, southeast of Mosul. His house was destroyed during the war with ISIS. He is now living in the Kurdistan Region and waiting for security and stability to return so he can go home with his family. If that doesn’t happen, he will likely stay in Kurdistan.

“What should I do after I go back? What is there in my region? Electricity and water and other basic services of life are not available there. Where should I return to? My house was burnt. I have to stay,” Salim said.

More than 150,000 of Iraq’s Christians took shelter in the Kurdistan Region after ISIS. Nearly 70,000 have immigrated to Europe and other countries.

Some have begun to return home.

In the town of Tel Sqof, north of Mosul, nearly 700 families have returned home. The town was liberated by Kurdish forces and is now under Peshmerga control.

The numbers returning to towns and villages under Iraqi control south of Mosul are smaller.

Christian IDPs are calling for international protection, and they have stated that they will return home only once this is provided.

“We want to go back to our places, but we need international protection. Erbil and Kurdistan have been good to us,” said Idris Sami, a Christian IDP.

Salim Yousif agrees. “We want to return but we want security and stability so we are not hurt again.”

The future of Christians in Iraq was the topic of an EU conference in Brussels this week where European politicians have voiced support for Iraq’s Christian population.

“We have a responsibility from the European Union to assist in this. It’s in our interests that the mosaic of people of the Middle East of Iraq will remain as such because that brings stability to the region. And stability in the Middle East means also that we benefit from that in Europe,” Lars Adaktusson, a Swedish member of the European parliament who put the conference together, told Rudaw’s Zinar Sino.

Rather than conferences taking place outside Iraq and driven by perceived external agendas, some Christian groups would rather see international support for efforts within Iraq, driven by the stated goals of Iraqi Christian parties.