Source: Pravmir.ru
Natalya Mihailova | 21 September 2014
During a meeting of the Higher Church Committee, Patriarch Kirill of Moscow and All Russia pointed out the necessity of increasing the number of military chaplains in the Russian army, the improvement of their training and selection, and suggested making a film about their heroic service. 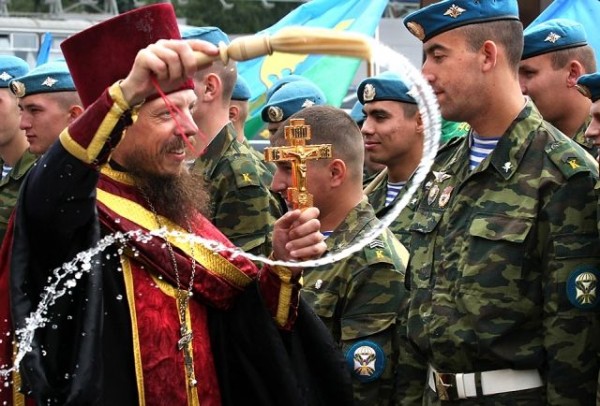 “We should give a new impulse to these activities and fill all positions in the short run. Perhaps we will discuss increasing the number of positions, but there is a serious issue about priests’ selection and training,” the RIA Novosti quoted the words of the Primate of the Russian Orthodox Church.

Patriarch Kirill specified that the conditions of chaplains’ ministry should be alleviated and their financial security should be improved. Last year around 120 Orthodox priests were appointed to the military forces. The largest number of military chaplains is in the Kaliningrad region.

“Their service includes considerable difficulties. Frequently chaplains are separated from their families,” the Patriarch stated. “When they serve in remote garrisons, their financial security is insufficient. They work under difficult conditions. However, I see a certain heroism in such ministry.”

In particular, His Holiness, Patriarch Kirill, suggested describing the activities of military clergymen who “participate in training, various operations, and exist side by side with military men” much widely, including the use of work of arts.