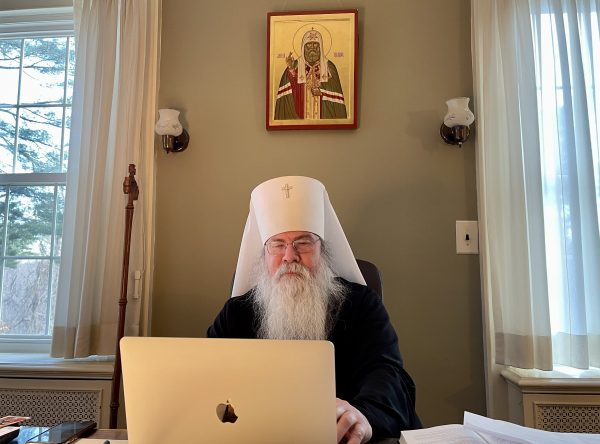 The regular Spring Session of the Metropolitan Council of the Orthodox Church in America took place on Wednesday and Thursday, February 9-10, 2022. Due to ongoing limitations and concerns caused by the pandemic, these meetings were conducted by video conference.

Under the presidency of His Beatitude Metropolitan Tikhon, the Council conducted general business reviewing and discussing reports that were previously submitted in writing. The Council heard a report from His Beatitude who highlighted events of church-wide significance and his own archpastoral work in his diocese, the dioceses currently under his locum tenancy, as well as his primatial work. The complete text of Metropolitan Tikhon’s address can be found here.

Archpriest Alexander Rentel, Chancellor of the Orthodox Church in America, presented his report highlighting his activities and the work of the Chancery, especially personnel changes and the annual performance evaluations conducted in January. The Property Committee updated the Council on the sale of Westwood (the Chancery property) and reported that no viable offers have been received to this point. Marketing strategies going forward will be discussed in the coming weeks. The Property Committee also presented a resolution to begin the relocation process of the Chancery by establishing an office in the greater Washington, D.C. as early as July 2022. Metropolitan Tikhon and Priest Alessandro Margheritino, Secretary of the Orthodox Church in America, would both relocate at the same time while the rest of the staff remains at Westwood until the beginning of 2023.  The resolution, which was adopted with overwhelming support by the Metropolitan Council, is not considered final until it is presented and approved by the Holy Synod at the upcoming Spring 2022 Session in March.

Father Alessandro also presented his report noting updates on technology issues, reporting on the work of SMPAC, the hiring of Ms. Emily Waters as the new Acting ORSMA Coordinator, and the management of Westwood. He offered a lengthier report on the OCA Archives giving updates on the relocation process and the proposals received in response to the Request For Proposals published in 2021. Two members of the Metropolitan Council also offered a report on a recent visit to the Florovsky Library at Saint Vladimir’s Orthodox Theological Seminary where the Seminary proposes to house the OCA Archives. In considering that the proposal from Saint Vladimir’s and the on-site evaluation of physical facilities effectively demonstrate their storage space to provide for necessary environmental protection and accessibility of the Archival material, and since Saint Vladimir’s commits to continuing the digitization project and applying for new grants for the benefit of the Archives, a resolution was presented for the Metropolitan Council to authorize the Chancellor and Secretary of the Orthodox Church in America to engage Saint Vladimir’s in logistical and contractual discussions for the purpose of preparing a written agreement, for presentation and approval of the Metropolitan Council in summer 2022. Also in this case, the resolution was overwhelmingly adopted but is not to be considered considered final until approved by the Holy Synod next month.

Andrew Smith, Treasurer of the Orthodox Church in America, offered his report in which he reviewed current financials, proposed amendments to the 2022 budget, and introduced representatives from Satty & Partners who reported on the external audit. Ms. Maha Adranly, one of the three internal auditors, presented the auditing report noting the good health of the finances of the Orthodox Church in America, and thanking Mr. Andrew Smith and Ms. Susan Wisnewski for their hard and diligent work.

Mr. Smith also offered an update on the Metropolitan Council external review of the OCA Pension Plan which is currently being conducted by Cheiron, Inc..

Among the other reports received and presented, Deacon Peter Ilchuk, All-American Council Manager, updated the Council on that plans for the upcoming 20th All-American Council in July 2022, and submitted the draft of the AAC Agenda prepared by the Preconciliar Commission and which will be presented to the Holy Synod next month for final approval.

The Metropolitan Council heard a report from Archpriest Thomas Soroka, Project Manager for the OCA Departments, on the various completed, ongoing, or pending projects or tasks of the six currently active Departments of the Church.

Each report was followed by questions and deliberations by the Metropolitan Council. In conclusion, His Beatitude Metropolitan Tikhon thanked the Council for its positive and productive work and closed the meeting with prayer.

Minutes and reports from the 2022 Spring Session of the Metropolitan Council will be posted on the OCA website as they become available.